I should learn not to tempt fate. The first day is hardly over and visit to la pharmacie has already been done. The ferry arrived at Roscoff with disembarkation at 8 am (so 7 am for us) – so far so good. We elected to skip breakfast on-board and instead partook of the le petit dejeuner at St Pol-de-Leon. Thereafter the route took us through the familiar artichoke fields to Carantec . . . and it was here that my trouble began . . . but first some back-story.

Yesterday, in a fit of holiday bonhomie S suggested that we luncheon in Plymouth and take advantage of the the ‘half price Mondays deal’ at a well known city centre bar where I partook of the seafood linguine – the more astute amongst you can already guess where this is going. This was vey nice as far as it went, and turned out to be much farther than I anticipated, as follows . . .

. . . back to la journeé from Carantec to Morlaix. In a thumb to normal SBCC tradition, I had not planned on stopping in Le Café d’Europe for the de rigeur café au lait, however, in actualiy I ended up making a very urgent and unscheduled stop followed closely by a visit to la pharmacie where, thankfully, ‘Immodium’ is spelled exactly the same in French as it is in English, thereby sparing me an embarrassing mime, which regular readers will know is a feature of my uncannily regular attendance at these (thankfully ubiquitous) such establishments.

Having stemmed the flow, so to speak, we continued on or way around the coastal route of northern Brittany. This is the route of the Tour de Manche, part of Velo 4, and is signed by little green signs all the way around. I have included one here because it is instructive to note that on not one of these signs does it show the little green cyclist fella’ pulling a bloody great orange trailer – the reason being that the Breton coast is much like Cornwall . . . need I say more. 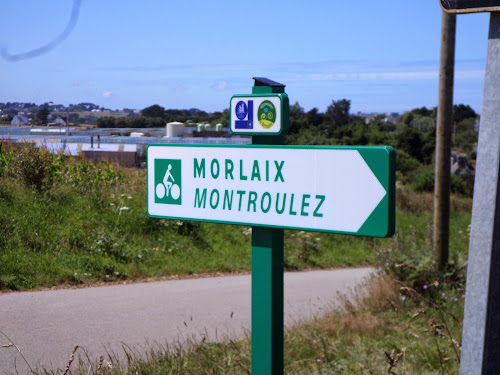 Eventually we arrived at our destination where, after the usual reparteé about . . . ‘my booking having been made on-line and being unable to pay a deposit because they did not accept a card and despite receiving assurances that it would not matter in this instance but now there didn’t seem to be many camping spots left . . .’ the nice woman at the desk got it all sorted. Having treated S to her favourite camping dish of saucisson et pomme de terre we are now ensconced on la plage watching the sun go down. 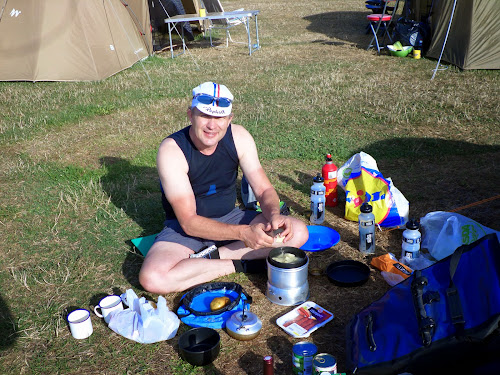 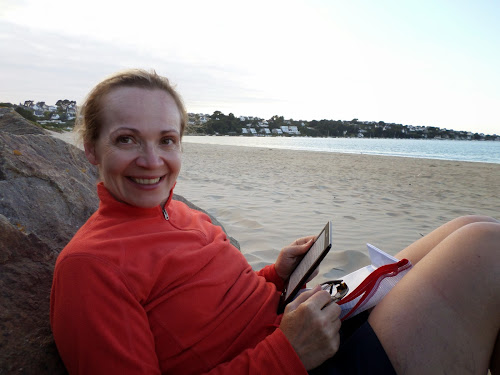