I have already alluded to some literary motifs on this trip, namely Zen and the Art of Motorcycle Maintenance and Don Quixote. Now, in one of those curious episodes in which life imitates art, some of it has become manifest. In the spirit if the former I will relate a series of Chautauqua’s, with farcical elements of the latter built in . . .

HEVANS and the art of bicycle maintenance

Bright and early we left Locquirec for our next destination at Port Lazo near to Paimpol . . . as far as the entrance to the campsite that is, where my chain refused to stay in gear. Close inspection revelealed a fatal incompatibility in the Da Costa trailer which I failed to notice at the outset, namely that it has completely sh***** my rear derailleur hanger by levering down on the mounting nut every time I went over a bump and bending it inwards to throw all the gears off. Now this is potentially a holiday busting occurence becuase the hanger is an intrinsic part of the bike, so if it breaks . . . cue lots of swearing and expensive car hire. However, by utilising my new powers of Zen (S rolls long suffering eyes) I have bent it back and fashioned a repair by way of a series of Zen-like, unlikely occurences:

1. The supermarché in our destination of Plouezec was open 9-12 le dimanche;

2. They had in stock the very washers which I needed to pack out the skewer nut to provide the requisite clearance.

A proper repair will have to await a return home to the shed and machine vice for alignment but it should be OK for the rest of the trip . . . I hope? 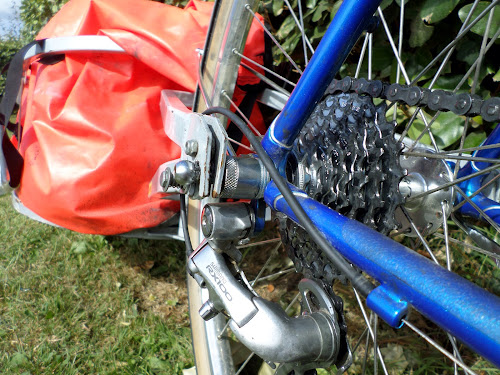 Anyhow, we got to the next campsite at Cap Brehat via many idyllic Breton villages, where the usual dejeuner was partaken of. On arrival it was clear that this was clearly a more middle class campsite, with German, Dutch and English rather than the 20th Arrondissement . . . BUT it did cost twice the price! 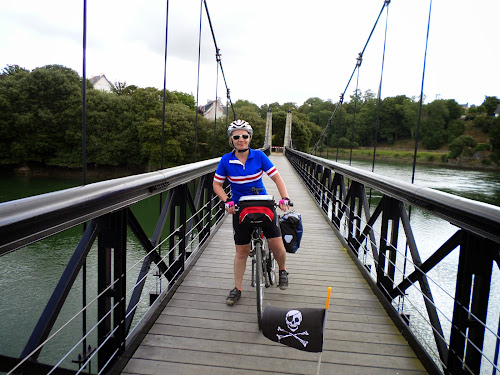 I’m sure that you have all had experiences with French toilets. Now, I am not one to turn my nose up atablutionary preference, so to speak, but one thing puzzled me at this campsite.The sanitaires were unisex – nothing unusual there – but how often do you think this table and chairs were used for ANY possible intended purpose . . .? 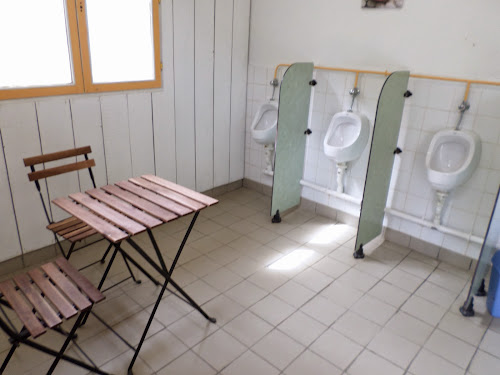 So we leave Cap Brehat and arrive at Saint-Brieuc via some rather charming cycleways and fishing ports, with S looking rather sporty on her way across the MTB track. 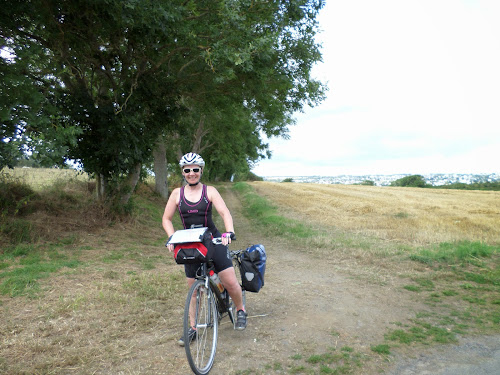 So, when we arrive at Saint-Brieuc where, after six days on the road and sleeping on hard ground with nothing but veggie curry to eat, S insists on a ‘posh meal’ (translation = expensive meal), so I ask Monsieur Hotel for a recommendation, which he promptly supplies. He also offers to wash our sweaty clothes, which we enthusiastically accept – but unbeknownst to him, I will appear later with an enormous bag of mouldering cycling and camping gear, flies buzzing around it like Beelzebub himself and sealed with biohazard tape . . . oh well, he did offer!

Anyhow, we off to the posh restaraunt, a fish place (excuse the pun) which is actually very excellent and about 10,000 calories per mouthful – even if S did stop me from rendering my impression of the mating call of the oyster while eating the fish soup . . . but I digress . . . because, in one of those curious moments when which time wraps around on itself, I order a bottle of Saumur vin blanc. The the wine menu was written on a blackboard at the end of the room so I couln’t read anything but the origin and the fact that it was the second cheapest at €23, so imagine my surprise to dicover that it was Langlois-Chateaux, the very place that we had visited on our first Tour to the Loire – Zen indeed. 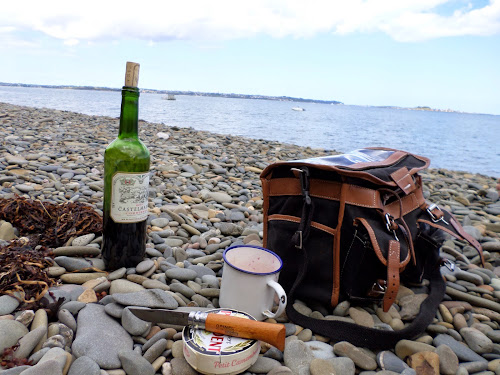