I suppose I should tell you something about Saint-Brieuc. First, I must say that the approach did not bode well . . . after passing through numerous picturesque ports, lined with bustling restaurants, we entered S-B via a long hill, from the direction of the container port. 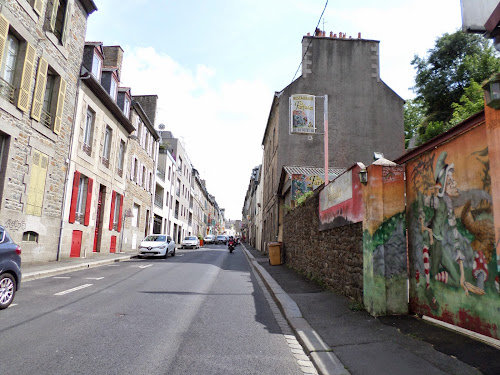 Seeing the ubiquitous graffiti, boarded up shops and a rubber goods emporia, prompts S to say that ” . . . this looks like the bad end of town”. No sooner are the words out of her mouth than I stop and inform her that we are outside the Hotel which I have booked for the next two nights. I assuaged her concerns by saying that this part of town is ‘on the rise’ and, several years hence, we will be thinking ourselves lucky to have been able to stay in such a sought after area, and regale our friends at dinner parties about the time we stayed in Saint-Brieuc before it was ‘discovered’. It turns out that we are right next to the equivalent of Plymouth’s ‘Barbican’, but Mnsr Hotel informs us thst the place is not buzzing because, as is not unusual in Fance, it is mostly ferme Lundi.

Monsieur Hotel is extremely helpful, and in possession of a very dry sense of humour: having offered to do our washing and being subjected to a ‘weapon of mass destruction’ he mentioned that there was ‘a lot of it.’ So last night, on venturing to to the basement laundry room to retrieve our drying kit, I found it festooned nicely from various hangers around the toasty drying room – all of which was our stuff except ONE solitary handkerchief . . . a Gallic laundry sense of humour indeed!

Despite us taking advantage of his lavage goodwill, he has supplied some excellent restaurant suggestions which have rendered us incapable of movement and logical thought as I write this blog. Last night at La Restaraunt du Port contributed to a considerable hardening of the arteries; we followed that up with dejeuner at the seaside port of Binic; and finished it off tonight at L’atelier du Temps where we gorged on yet another three course meal of paté, hake and vegetable cassoulet and ice-creamcumblyfruitydesertthingy, accompanied by another ‘second cheapest [relative term] vin du carte’. 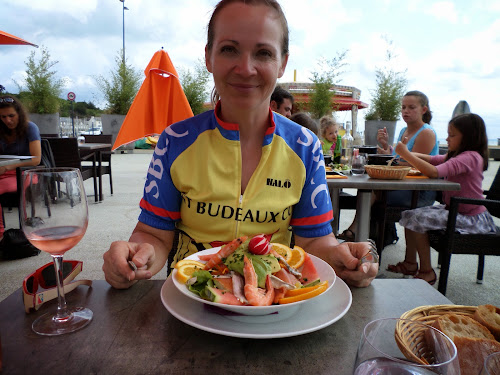 I cheered up S by telling her that we would need the calories for tomorrow’s leg to Lac Guarledan, where we will enjoy three days of le camping to scour our bodies of the last two days of easy living. I intend to make a lentil chilli to help in this process, followed by morning dips in the Lac and sprints up and down the hill at nearby Mur de Bretagne – S does not yet know the significance of this . . .