Well, it had to happen, our luck couldn’t last. On day 10 the heavens opened and hosed it down on our campsite. Consequently, there is very little to relate unless you count squatting in a dripping tent waiting for gaps in the downpour to enable to making of tea/dinner and go to the toilet block. We did get out for a quick walk around the the lac in the alternate direction to last time and came across a holiday chalet village (a French version of Bultins but with better food I would imagine) where I availed myself of their free and unprotected wi-fi access in the communal bar at a cost of 1.5 chocolats for the price of 2 given that my cup was half empty – in this case, as I commented to S, my alleged cynicism being amply demonstrated by embodiment in physical realilty. No matter, I was able to upload the last blog post until we were ushered to one side to make room for the kiddies talent contest. 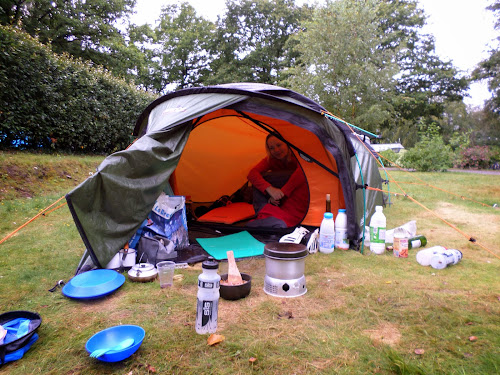 On day 11 we broke camp for the last time this holiday. Luckily the day dawned dry and S was up with alacrity at the prospect of seven consecuitive nights in a real bed with sheets and a mattress, and a table and chairs to sit on, with cold beer in the fridge, and a washing machine to expurge that ‘camping whiff’ (aka Eau de Glastonbury) hat hangs about everything when you have to stuff all your clothes into two small bags every day so that the clean and dirty are in such close proximity that eventually one is unable to distinguish between them. Talking of ‘camping whiff’, as we were packing up it did occur to me to mention something which had been preying on my mind since our arrival, but which I though best not to mentin to S . . . Now, as anyone who has been camping will know, the proximity of the toilet block is in inverse relation to the desireability of a particular pitch. The is also an inviolate law that, on returning to the tent after brushing of teeth and other bedtime ablutions and zipping up the sleeping bag, the urge to go to the toilet instantly comes upon one, even if you’ve just been. However, the toilet block is a half mile trek away in the dark and (likely) rain, and you are now wearing your favourite jimjams which, while being perfectly comfortable nightime attire, will not attract any admiring glances . . . so you think ‘stuff it’ and try to get to sleep. Now, one of two things will happen:

1. You fail to nod off and eventually have to give in to nature’s call and set off across country;

2. You go to sleep, but awaken at 2 am in thrall to an urgent and all consuming need to empty your bladder. But now it is pitch black and has definitely started to rain, so there ensues an extended period of fumbling with zips and head torch, location of flip-flops and perhaps a waterproof jacket, not forgetting toilet roll if that has also become is necessary because there is never any in these municipal campsites . . . and during these logistical gymnastics, the equivalent of D-day preparations, all the time things are getting more urgent, ampllified by the sprint to the block in the chilly night air . . . well, you get the idea.

My point is that if you are so encamped at the far end of the site, especially with a load of kids in tow, the temptation to short circuit this whole farrago by just going in the hedge round the back of the tent, au naturelle so to speak, is exceedingly great. I can assure readers that we are made of sterner stuff than that, but this might explain the whiffy smell that had emanated from the corner of our pitch since we arrived . . need I say more. 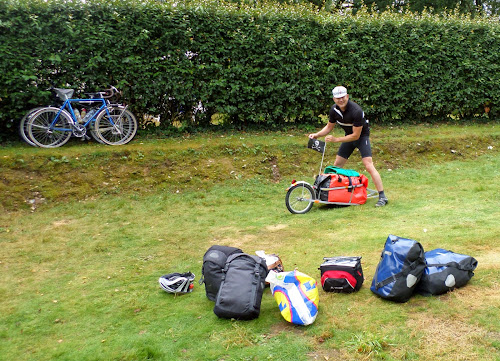