Where have we been?

Everyone has been asking “why has the blog stopped?” I could say that I have had writers block but, truth be told, I just couldn’t be a***d. So, here is a summary of our activites, now that I’ve got round to doing it.

We decided to to take a day trip to Pontivy once more, so set off at the crack of 9.30. On the way we passed a long distance race along one of the Grand Randonée routes. We have encountered this before so it must be a regular event. Several things characterise these races but the singluar one which stands out is the disproportionate number of Japanese competitors wearing hi-vis vests (of the type you would use when the car breaks down on the motorway) and knee-length compression socks; and that everyone seems to be experiencing a considerable amount of pain. We spotted the first of these unfortunates as we approached Silfiac but quickly distanced them on the long downhill stretch toward Clegurec, but then disaster . . . the first, and only, puncture of the tour befell HEVANS001 . . . “S, we have a problem” I shouted over my shoulder. The roadside repair was relatively straightforward, but as I was faffing around trying to find the tyre piercing culprit, who should amble past but said randonneurs . . . the hare and the tortoise springs to mind. So, we never reached Pontivy, but instead bactracked for le dejeuner of moules at a nice lakeside restaurant in the middle of nowhere where we were the only customers. “Another tough day at the office” I said to S as we tucked into the moules et cidre. . . 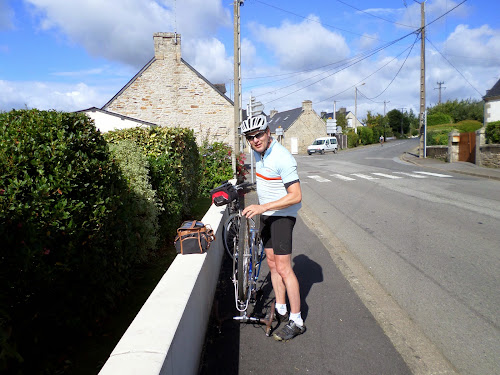 On the way back to the gîte we once again attempted to find the menhir, from which we were distracted in our quest by the blackberry largesse, and this time were successful. The informational board held forth various theories for it being there, but I prefer my own: that it was a place of sacrificial worship where unfortunate offerings were brought and lashed to the stone before being summarily despatched, or left for the Gods to devour by proxy of having birds peck away at their flesh; or alternatively that it was a potent fertility symbol representing a giant . . . well, you get the idea. Needless to say, S was unimpressed with any of my suppositions, and demonstrated her definition of fertility with retrospective knowledge of the consequences having two grown up ‘children’, who will doubtless be cleaning the house, preparing a sumptuous meal, making our bed and plumping the pillows in anticipation of our imminent return . . . 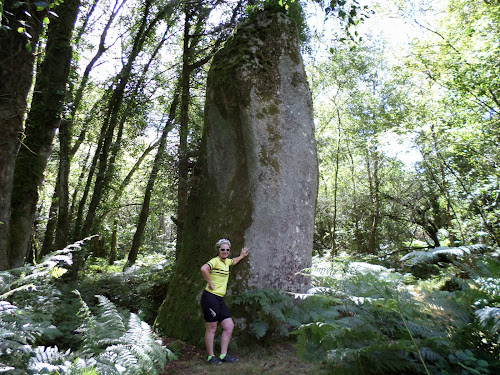 So, the final day arrived, and we had to quit our gîte and make a dash for Morlaix up the voie verte – 25 uphill miles pulling the trailer. I made it . . . just, by unaccountably drafitng behind S’s wheel for at least 100 yards . . and we arrived in Morlaix to enjoy a traditional beer at Café d’Europe, and thence to Hotel du Port. S was determined to have a diner traditionnel, so we ended up at Le Marmite . . . well you know what they say, you either love it or hate it! The menu was chalked up on little slates which the waiter presented to us balanced on a miniature easel. Thus placed, and as I was holding forth to S that the poor lad must have been drafted in to cover for the regular help, I knocked it off it’s perch wherewith it crashed to the floor and splintered into a thousand fragments, thereby invalidating anything that came out of my mouth for the next hour or so. Luckily we were the first in, so no-one was around to witness my faux pas and laugh loudly. . . other than the waiter . . . and S . . . and billions people who read this blog . . . 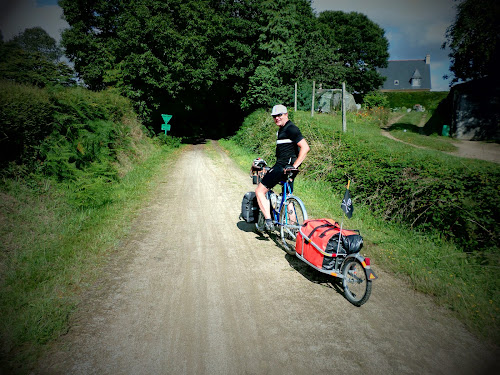 The last day saw us make a leisurely progress to Roscoff where we indulged in the tradiaitonal harbourside moules et frites, then onto the ferry . . . 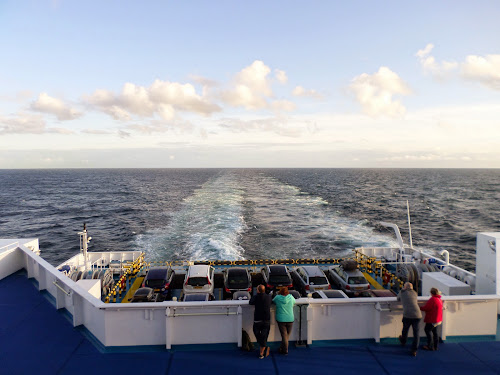 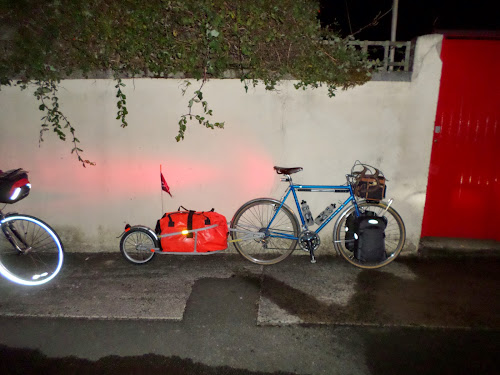 520 miles all told . . . pulling the bloody trailer . . . until the next adventure to see La Vuelta in Northern Spain: the ‘Old Gits and Two Girls Tour; will my derailleur hanger play up; will JJ get his patatas bravas; and will the old woman still be knitting socks? All will be revealed from 31st August . . . watch this space . . .