The SBCC set off for the Tour of Spain with sun shining on us at the Ferryport. This time, we have bowed to the inevitabilities of age, not to mention insomnia, and booked cabins for the crossing. Hence, I am hoping for a restful night’s sleep; in contrast to the last time when we slept in the restaraunt, where the lights never go out and the cleaners start vacuuming at 6 am. Of course, since four of us are sharing a cabin a good night’s sleep might not happen in any case . . . 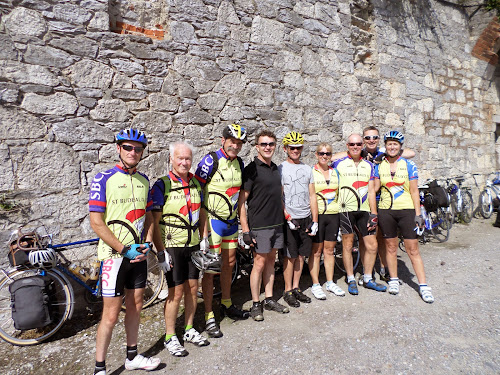 Infortunately S was not best pleased because she couldn’t come with us . . .

So, we repaired to the bar for pre-dinner drinks . . . already I managed a contretemps with a bloke jumping the queue . . . never happens in Wetherspoons I think. The crossing was calm and our cabin small, but that didn’t matter becuase JJ has a hard head and survived the frequent encounters with the edge of the metal bunk. So, we hove in to Santander and set off for San Vicente by a route which JJ had reconnoitred in the spring . . . well he said he had, and we found it after only two wrong turns.

It was hot, high 20s centrigrade, but there was a cooling wind to mitigate the worst effects – unfortunately it was a headwind. Lou has the distinction of the first puncture of the tour, a spectacular affair which blew the tyre off the wheel and split the inner tube . . . and her spare had a hole in it. What can a girl do but call on not one, not two . . . but three OGs to fix the wheel . . . 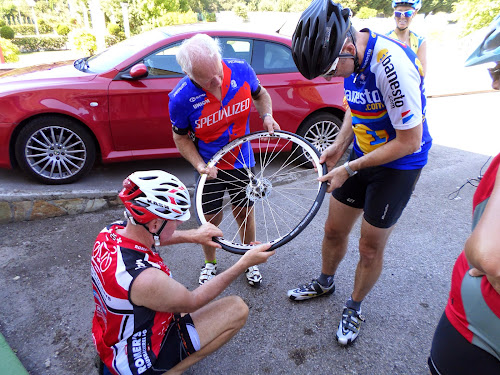 That’s one down. A mile or two down the road and Marks rack starts to fall apart. Luckily, always alert to potential problems with mudguards, gear hangars and the like, I am prepared with various nuts, bolts and washers, so an instant repair was effected.

We arrived at Playa del Ombre none the worse for wear and I am contemplating the first cold one as I write. . . 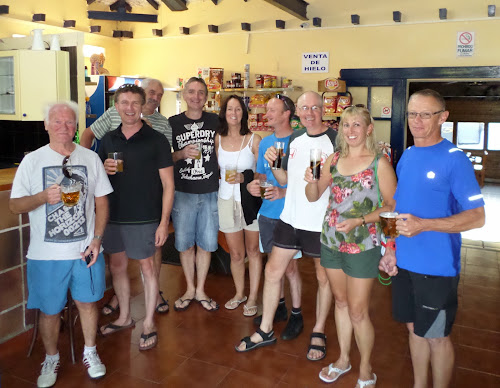 . . . I can’t say that the sidra is as good as the cidre but the rosada de la casa was just fine.