Today we went ‘West of the Picos’ . . . as Lee van Cleef would say. Well, not exactly because we are actually in the Picos, at Camping Picos de Europa to be exact. After some pre-ride fettling – JJ lashing his saddlebag with bailing twine and Greg had fixing Colin’s gear changer to allow him to get on the big front ring (why this would be necessary I have no idea since Colin hardly ever uses it) we left Playa del Oyambre in glorius sunshine. 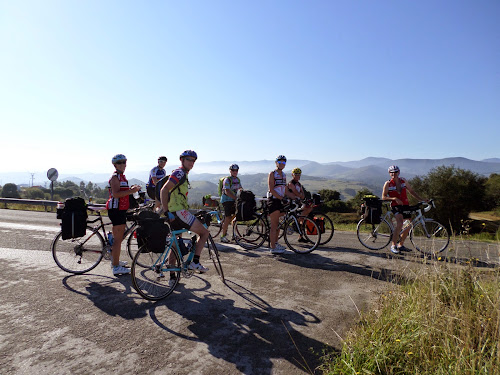 After stopping for the tortilla at the usual SBCC cafe stop, the route took us through some wonderful scenery, chamois clinging to the high peaks and vultures circling above . . . probably waiting for one of us. The temperatue hit the 30s, the water bottles ran low, and JJ lost his shorts somewhere between there and here . . . Luckily we had no mechanicals today other the fettling before the off, which was just as well because the BIG HILL was yet to come! 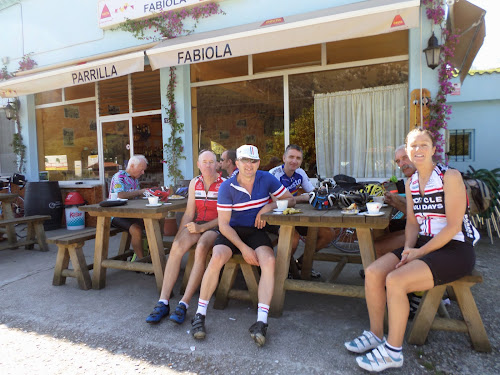 We stopped for lunch just before the BIG HILL. It took longer to order than to eat what with eight people with none, and one with some, Spanish trying to navigate the menu. I managed easily by resorting to picking random items from the menu del dia – Colin said ‘dos’, Greg said ‘tres’ and Mike said ‘whatever four is in Spanish’ . . . you get the idea.

And so, we come to the BIG HILL. At the bottom a chap went past us wearing longs. . . the temperature was in the 30s by this point and the sun was roasting us as we cycled beside the rock face of the mountain, the sweat was pouring down into my shorts, the helmet was off and I was dousing my cap in water. . . maybe he felt the cold? As you can see from the look of Colin at the top of the hill, neither longs nor his big ring were necessary . . . 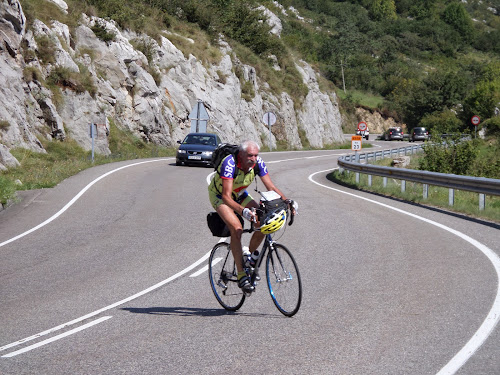 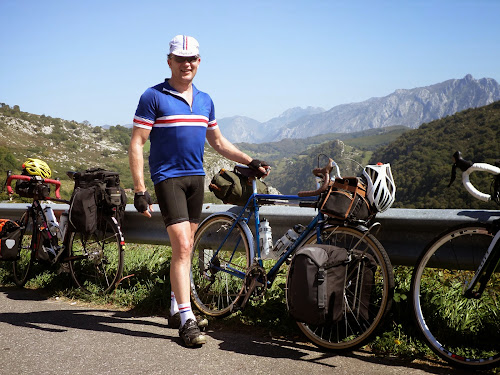 So we arrive at the campsite and straight into the shop for ice cold cerveza. Thinking they were unoccupied, Greg has liberated the clothes pegs from all of the adjoining cabins, only for their occupants to return from days out at the beach . . . We have said nothing.