Today the group spilt, with one party setting off for the climb to La Covadonga, and the other on a mystery tour of my design. We all set off together towards Cangas de Onis, whereupon Greg, Lou, Mike D, JJ and I peeled away in the direction of Arriondas and thence in the direction of Oviedo along the dual carriageway . . . so far not so scenic. The plan was to get to a mountain road that went up to Cazo and looped round back to Cangas – those roads with green next to them on the Michelin map that designate a scenic route. We were late starting and further delayed by a fruitless search for a bike shop and flip-flop emporium in Cangas, but eventually we made it to the start of the climb, and climb we did . . . for 18 continuous km up a mountain road with only the goats, cows and their bells, and a lone delivery man (shuttling up and down in his van dropping off bread and fags) for company. 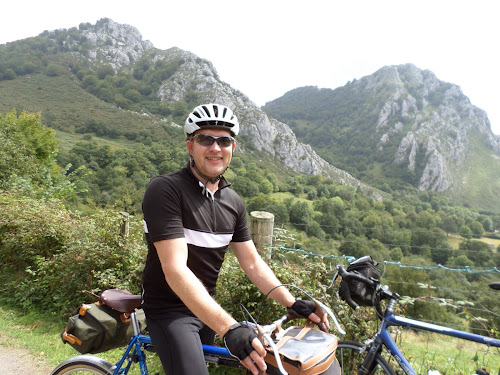 Up we went, then up again, then up and up and up and up . . . back and forth this way and that as the road looped and climbed its inexorable way to the top of the Sierra de Faces. Eventually we reached the summit and were rewarded with spectacular views, but by this time it was 2 pm and we had brought only bits of cake and Haribo to eat, and had seen absolutely no place to buy provisions for 18 km. 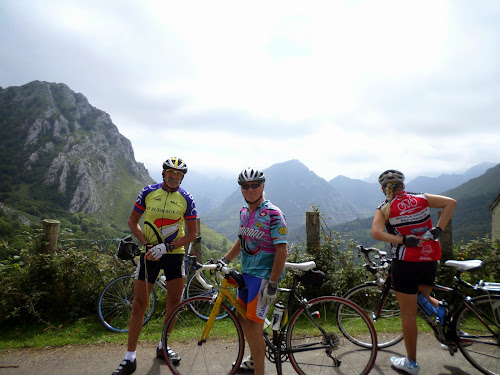 Just as we were comtemplating whether to eat JJ two Spanish mountain bikers appeared from a nearby track and hailed us well met. In one of those coincidences that weave a golden thread into the rich tapestry of life one of the duo spoke perfect English and informed us that his companion had been regaling him for the past hour about Casa Ricardo, a restaurant in the nearby village which served local Asturian food in mountainous quantities for a very little money. So, thanking him profusely and thinking that it seemed like a scene out of Lord of the Rings we made haste to said casa where we spent the next two hours gorging on a casserole of flambada, goats stew and creme caramel, accompanied by vino and sidra. . . just like les dejeuners of old. 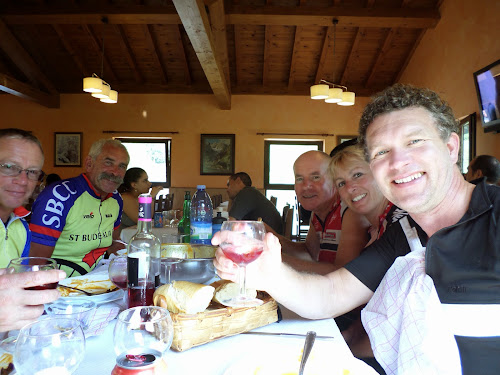 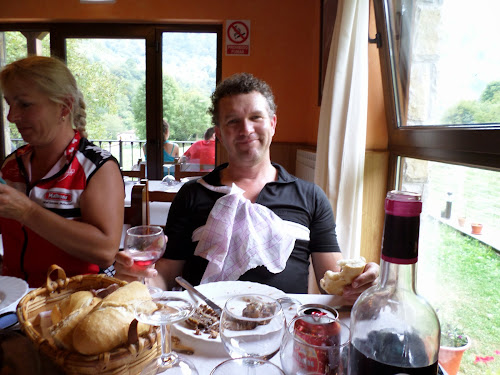 Eventually we had to leave and wobbled out, completely stuffed, in preparation for the remaining 30 km of our journey. Now, you may wonder how we managed this in our engorged state, but as fate would have it we had chosen to ride the ‘right’ way around the mountain, and the journey back to Cangas was through a picturesque canyon along what was essentially a false flat. 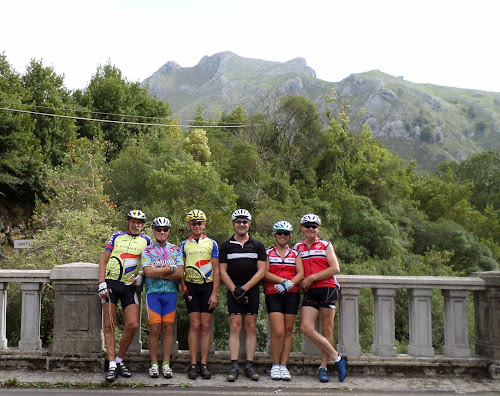 A race back to the campsite finished us off – I just manged to reel Colin in yards before the entrance . . . Ha!