We disembarked from the ferry to be greeted by the usual overcast, leaden grey of the Brittany weather . . . so immediately felt at home. The forecast was for warm and intermittent sun, but for most of our ride it was rain, cloud and . . . well, rain.

Not to spurn tradition, we stopped for the inevitable café au lait at Café d’Europe in Morlaix, thence on to Huelgoat for le dejeuner at Le Brittany Pub. Now, said pub is owned by an ex-pat called Pete and the menu offers, amongst other culinary delights, a chip buttie – which Colin naturally availed himself of to complement the full English breakfast on the Ferry.

So, still easing ourselves into French culture, we set off for Carhaix without even stopping to sample the delights of the Huelgoat stones as in previous years – the Roche Tremblant went untrembled, and the Le Gouffre was un-gouffed. No matter, the road was long and arduous, so we stoked up on ham, egg, chips and cidre, and set off on the second leg ofour odyssey. 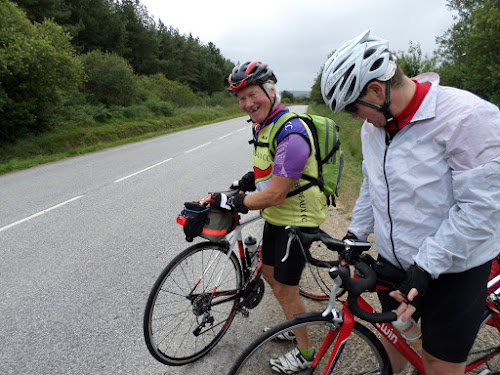 Now, regular readers will know that JJ is a light traveller, and now that he recently purchased a fancy new, carbon racing bike, he is necessarily a much lighter traveller than previously – because he has sod-all anywhere to put his stuff. So it remains precariously perched above the rear wheel in his aged, rear saddle-bag. Needless, Heath Robinson despaired after about 30 miles (as he always ways does – how many times have we been here?) when I had to lend him my bungy to keep it off his back wheel – c’est la vie.

After a detour to Decathlon (how unusual) we made it to Rostrenen and stopped at Lidl to make essential purchases. Thence up the hill to Prerret where Colin has manufactured a superb repaste of Spaghetti Bolognese, using the best Lidl ingredients, washed down with tetrepak wine – all is right with the world.

Now, if we can get some hot water it will be a bonus, though the necessity to run around in the shower to get wet generates some heat at least . . .