Alas, today I took leave of mes amis and headed back to Morlaix for an overnight stay at the St Melaine, before continuing on to Roscoff and the ferry back to Plymouth tomorrow. Now, regular readers will remember several serendipitous meetings on previous tours, and this one was no exception. As I made my way along the practically deserted voie vert from Rostrenen to Morlaix I encountered a chap with whom we had crossed paths on the outward ferry and also on the previous day. However, now having the chance to chat at length as we cycled up the path I discovered that, while he had lived many years in Plymstock, he was originally from Cardiff and had now returned to live in Pembroke; but also that he had worked in the Business School at Plymouth University for many years and taken retirement in 2006. Hence, there followed much discourse about recent scandals and other unwarranted gossip about said institution; small world indeed.

As I was on the voie vert, and not to spurn tradition, I stopped for le dejeuner at the ususal ‘bench’ just north of Carhaix – I’ll have to get one of those little plaques put on it, when I snuff, in the shape of a small Camembert cheese. 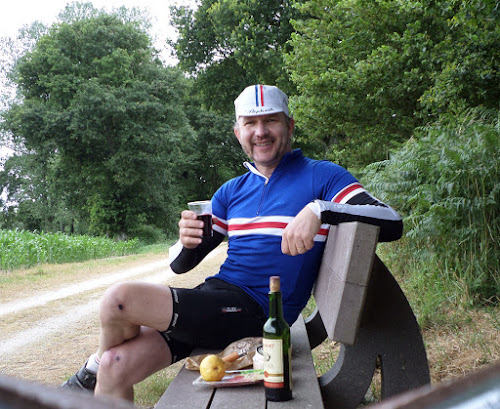 The more observant of you will have noticed that I have taken razor to parts of les whiskers and am sporting what I like to think of as the ‘Deadwood’ look, but I am sure that others will maintian that it is more ‘South Wales Workingmen’s Club and Institute circa 1970s’ look . . . At any rate, I could enter L’Eroica as I stand at this rate. Continuing on to Morlaix I partook of a couple of beers before checking in and dining at La Dolce Vita. There being not much elsae to do on a Sunday night I am off to bed. 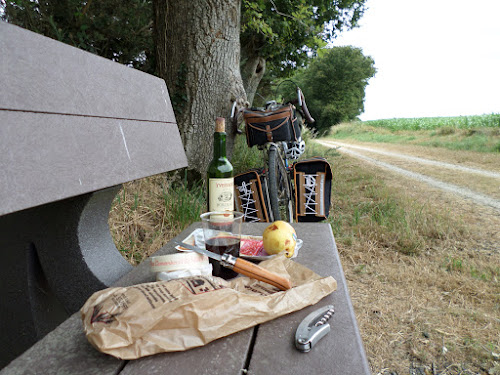