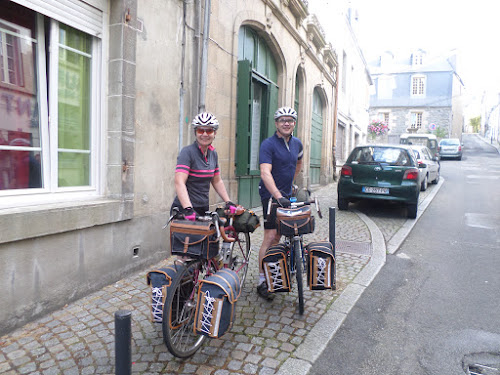 We left Morlaix resplendent in our His ‘n Hers randonneurs ensembles, and headed for the voie verte, which runs from Morlaix to Rostrenen, except . . . 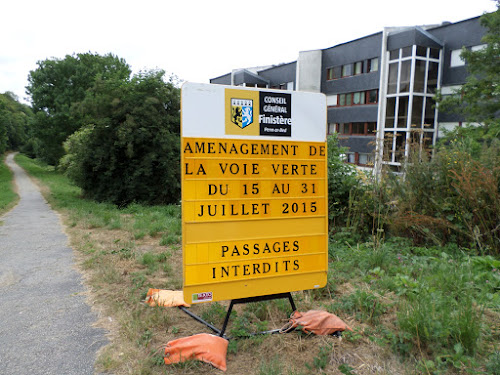 “Ha, not to worrry,” I say to S – knowing that this eventuality would arise after my previous reconnaisance mission on the ‘SBCC Old Gits’ tour to se Le Tour the previous week – “we will take a simple detour by road and join the path at the next picnic area” . . . and so it came to pass, which just shows you that a bit of plannning ahead yields dividends when thrust unto the great unknown, where you have to fall back on your cunning and initiative just to survive – S rolls her eyes . . .

Anyway, we set off down the v-v for the 88 km (that’s 55 miles to you) leg to our destintiojn at the usual stopping-off point in Lescouet- Gouarec, where we have booked the gîte of Pete & Keith for a week. Now, it’s funny how odd and unexpected things manifest themselves when off the beaten track, and so it transpired because, as we passed through the disused train station at Scrignac, the old platform and ticket office had been tansformed into a gîte and café. Presented with such an unexpected oasis, what can one do but stop for the inevitable café au lait. Now, regular readers wil know that the SBCC, being skinflints and tightwads to a man and woman, pride themselves on finding the cheapest and heartiest fare in the universe. I can now lay clain to that record, because we partook of a café and Breton Far (see previous blogs for a description of this extraordinary food – the type of thing they will be taking to Mars, but perhaps without the prunes given lthe limitedcapacity of spacecraft toilets) for the princely sum of €2 . . . YES, THAT WAS €2, TWO EUROS, DEUX EUROS. Even I, well versed in tightwadery, felt guilty enough to leave a €1 tip, and then S added and extra 50¢ – end of days! 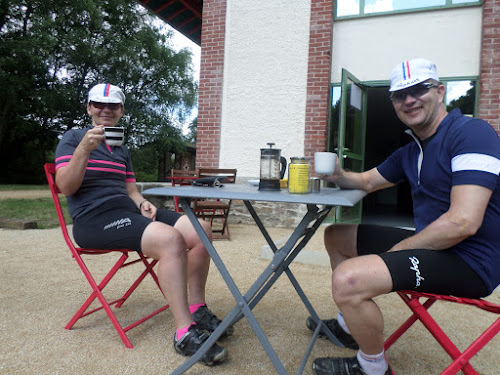 So, elated by such a bargain we set off with renewed vigour. Eventually, having stocked up at Le Carrefour Express in Morlaix, we stopped at the usual bench just north of Carhaix for le dejeuner, where the Camambert, baguette and vin rouge was deployed with frugality given the miles that lay ahead – the sun was out and the corn swayed gently in the breeze, what more could you want?

The voie verte took us to Rostrenen where we visited the local Lidl – a supermarché beloved of cyclists everywhere, particularly in France where thay tend to turn up in the outskirst of a ville just as you approach and are desperate for chaep and plentiful supplies – and then up the big hill to our destination pour le semaine. This was the bit that S was not looking forward to – because it is a bit of a hill and she, usuing the lame excuse of having had a foot operation in February, was claiming lack of fitness. Ever the mindful spouse however, I took her up the easy route and, as we crested the the hill into the village, were met by a welcoming committee of bagpipes and beer tents; apparently there was a local bike race going on, so I promptly stepped up and entered S in the over 50s category . . . 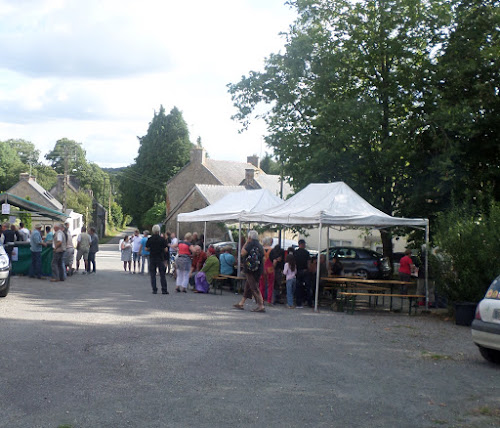 So, we arrived and were invited to dinner by our excellent hosts. Today it rained . . . so we did sod-all because we are both knackered! 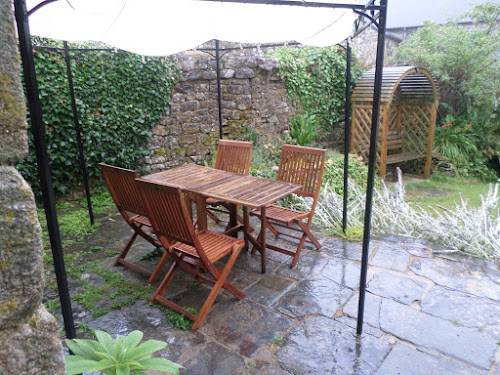