Stoked up with the best that La Dolce Vita could provide (refer to any blog post from Morlaix of the previous 5 years for an explanation of our ‘go-to’ restaurant) we were off for a repeat of the first section of our Tour de Manche of two years ago, this time sans panniers and trailer. Weather was again Baltic for the time of year, so arm and leg warmers remained firmly in place for most of the ride.

Now, regular readers will know how S loves to go ‘off the beaten path’, and this ride was no disappointment for her . . . 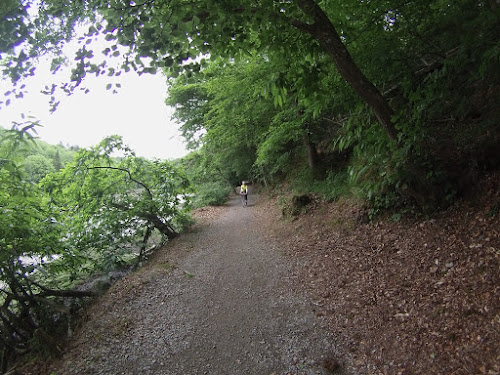 Subsequently, there were several turns off piste which S forbade me to explore . . . I suppose it worked out well in the end because, as we rounded a corner two old hulks hove into view . . 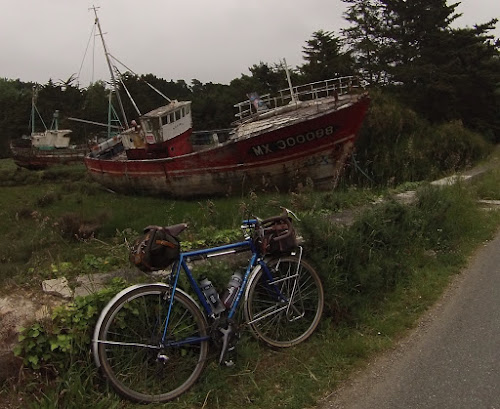 The destination of the day was Locquirec, where we had camped two summers ago, and the route was as I remembered it; frilly and hilly – hilly in the way you know it to be if you live in Devon or Cornwall and similarly, frilly in the sense that the signposted way insisted in taking us up and down every creek and inlet, so that 1 km = 20 km.

The more astute of you will have observed over the years that S has the sort of engine which doesn’t go far on ‘vapour’ – one minute the needle is on the quarter tank mark, and the next . . . complete shut down. So it was imperative that we reach our destination p.d.q. or I would be endlessly circling back with cajolements and offers of scraps of three-day old baguette from my back pocket for the last 10 k. Luckily, we arrived in time to refuel and enjoyed tha harbour view as we munched our poulet complet et saumon et crevettes, washed down with the customary demi-bouteille. 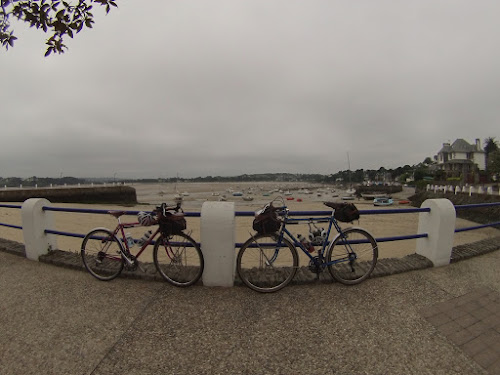 Typically, having enjoyed a hearty lunch, it becomes necessary to avail oneself of the local conveniences, but, having convinced myself there were some on the harbour, could I find them?. . . of course not. This, despite sending S out on a reconnaissance in a vague direction, dimly remembered (guessed) from past years? So, at odds with my natural predeliction to skinflintyness, we resorted to buying a café solely to avail ourselves. Normally in these situations I send S off to test the ground – not difficult, she being invariably being the most needy – but on this ocasion, having subjected her to one wild goose chase, I went to investigate myself . . . alas, they were occupied, so I returned to report back; after a suitable delay S sallied forth . . . still occupied; third time lucky I thought and, emboldened by my swelling bladder, I used a firm hand on the door . . . still occupied. It was at this point that I decided to do what no paid-up member of the male sex ever wants to, I asked . . . and received the reply ‘Oui monsieur, it is over there, it is free . . . it is a sliding door’

I put it down to some sort of drug in the coffee because, on our return, I swear that I rode past a succession of tractors driven by the cast of the Wizard of Oz, and then to top it off, Andy from last year’s SBCC club tour cycled past – well in fact it was Andy, so I stopped for a bit of a chat.

Returning to a foot-tapping S, I treated her to a Perrier (glass of water to you) at the Café du Port just to show that I know how to show a girl good time . . . 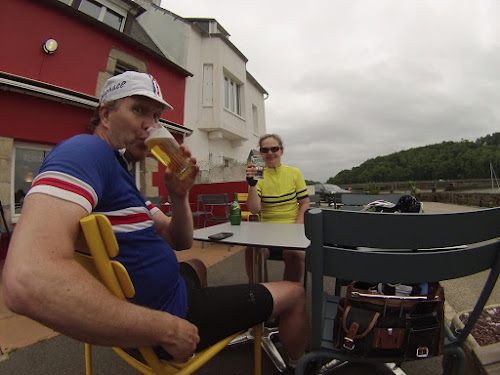 One thought on “French Raid 2”