Internet and network downage, plus lack of activity makes for a threadbare blog. Sunday was spent in a deckchair with cap pulled down over my face and a rug over my knees to keep off the chill, despite it being sunny. No, I haven’t aged 30 years since arrival, it is just called being knackered. Lack of cycling preparation this year has taken its toll and the typical Brittany weather is as unpredictable as our own changeable climes. Despite it allegedly being 17° C or so, the granite gîte needs a good couple of weeks of baking hot sun to get the air temperature even up to Economy 7 standard, so we hurried it along a bit . . . 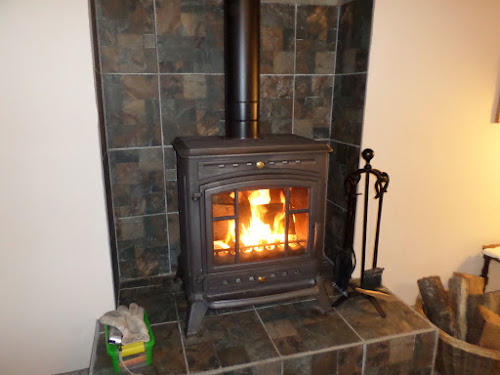 So Sunday was a day of rest. On Monday and we had arranged to meet up with the SBCC at the Decathlon, in Carhaix – no, not a sporting event but the chainstore purveyor of sporting goods and apparel. Tradition dictates that the club must make at least one visit to this emporium during any European trip of more than 3 days duration . . . so thus it was and purchases were made. On to an al fresco lunch on the Nantes-Brest Canal after which we wished each other bon route and went our separate ways . . . 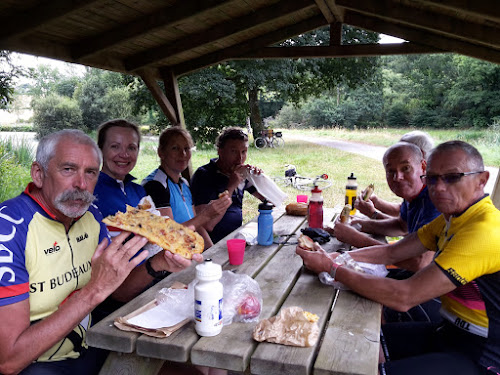 We have not explored this part of the canal before, between Carhaix and Rostrenen, so we cycled back along it. Compared to other parts it is a bit neglected but still quite rideable, so we scorched past other slower pedalling folk with baskets on the front. Even S got into the swing as you can see by the racing set of herjaw as she sped along the dusty track . . . 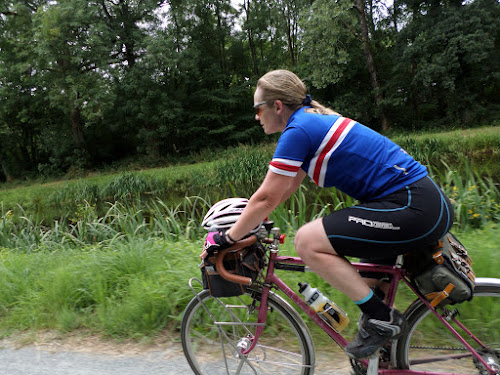 Unfortunately on this part of the path the puncture fairy was living in the undergrowth because, shortly after, she waved her magic wand over my rear wheel which suffered a massive blowout, the type which makes such a loud noise that you immedtately think a fatal mechanical failure has befallen an unobtainable component . . . 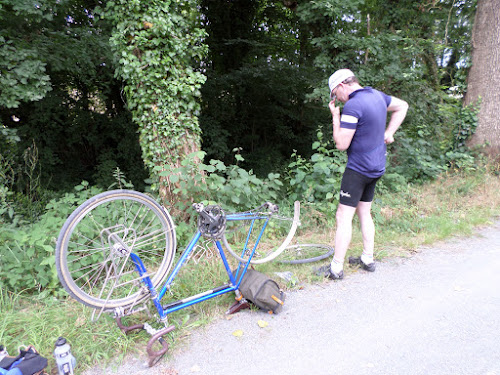 . . . the component in question being my rear tire, which had suffered a severe fraying gash to the casing. Repairing the inner tube didn’t seem sufficient but after much scratching of (and transferring oil to) the nose – and watching the aforesaid slower pedalling folk with baskets go serenely past – a technically sound solution presented itself . . . the judicious use of superglue and a Brittany Ferries boarding card on the inside of the tire.This is the second patentable discovery of the holiday; if I carry on like this I will be able to retire as I watch the royalties from these licensed strokes of genius come rolling in . . . a new tire has been ordered by the way.

Tonight we are off to the pictures to see an English film with French subtitles – presumably in the company of the middle-class French equivalents of English people who go to see French films with English subtitles . . . It is based on a Jane Austen novel so S will be happy, even if it hasn’t got Colin Firth in it.