Yesterday we ventured into new territory. After perusing the sales at Pontivy, and lunch at our favourite Moroccan restaurant, we headed further down the River Blavet on the bike path, ostensibly towards a scenic spot at Castennac. It was en route that S’s latest accessory came in useful . . . 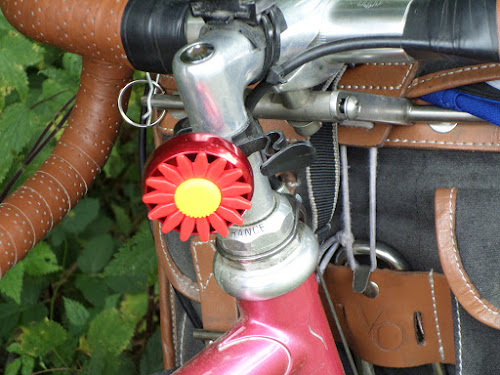 . . . she gleefully presented this to me some months ago, running all the way home from the shops and announcing that she had spent all of her pocket money on it; the princessly sum of £1 . . . I will be getting her some streamers for her handlebars and coloured staws for the spokes to go with it.

Nevertheless, it did come in handy for alerting the slow-pedalling folk that we were steaming up behind. However, it was during this leg of our journey that the Brittany Ferries boarding card finally gave out and my earlier blowout re-presented itself . . . 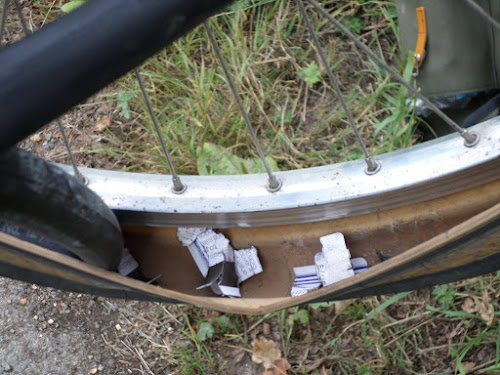 . . . but, with the foresight of the well preared cyclotouriste that I am, the replacement tire which I ordered had arrived the previous day and was now stowed in the depths of the Carradice. So, a quick change over, and we were once more on our way . . . not before S triumphantly pointing out that I had aquired a chainring mark . . . Clearly this is not in the same category as hers, because I was gainfully engaged in a complex maintenence operation, during which it is common to smear oil over parts of ones’ body, curse, throw things, and generally be bad tempered and impatient – especially when you have upended the bike in some particulalry potent stingy nettles and the slow-pedalling folk come smirking past . . . 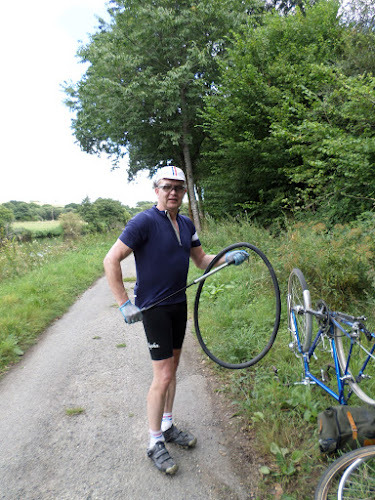 On we went until we arrived at the designated scenic spot, which was . . . erm, scenic. Another time, and we would have loitered for lunch or a bier, but I was conscious of the fact that we had cycled 45 km almost completely downhill. Now, as any cyclist will tell you, if you go down a hill then you will certainly have to go back up again if you wish to return to your starting point, hence the prospect of a 45 km uphill was not to be to be waved away as a mere trifle. So, off we set, on the return leg.

Now, as regular readers will know, I always maintain that one of the joys of being a cyclotouriste is that you come across unexpected delights by taking the path less travelled. However, knowing the propensity of S to suffer the dreaded bonk at a moments notice, I thought it best to enquire whether she wished to take the scenic or direct route, thereby insulating myself against any subsequent marital hot water, so to speak. Well, give her credit when it’s due, we happened upon a cycle race in the village of Melrand – the village had been closed off for the purpose and there was no way through. What else could we do then but stop for a cold biere and watch the fun race which was still going on after the main event. . . . 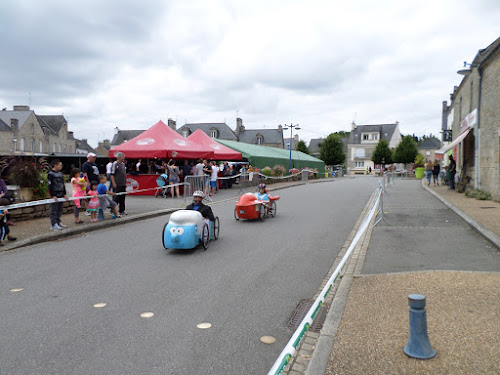 Apparently, this is called a Voiture a Pedalier, and there is even a European Federation dedicated to the sport, as evidenced by the card proffered to me as we loitered – http://www.fevp.fr. Obviously, there is a clear remit to vie for the most outlandish regalia . . . 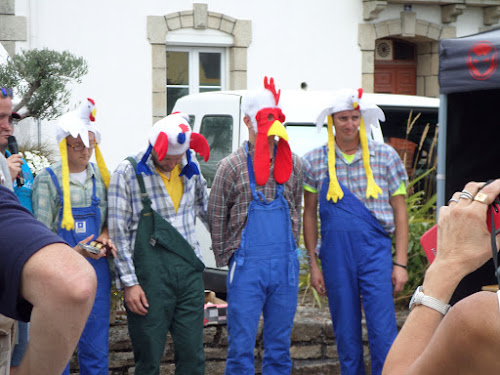 After all this excitement we still had to slog our way back up the remaining very long hill, stopping for the usual photo-op at the bottom of the last climb . . . 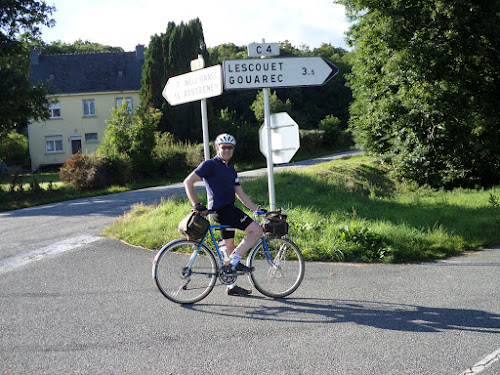 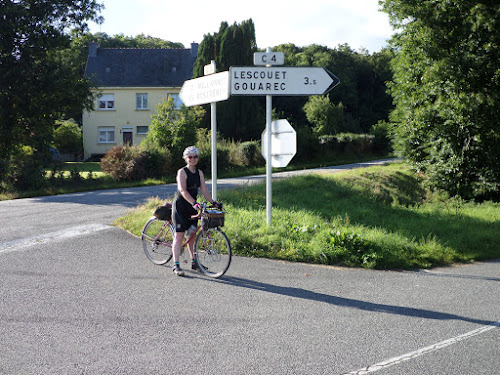 It was at this point that S, for some unaccountable reason, decided to start racing me back to the gîte. Perhaps it was the bag of Haribo Star Mix which she had scoffed earlier, now coursing through her veins like the equivalent of EPO for an ADHD afflicted child. Luckily, I have the Garmin, so I sat on her wheel until the very last steep nip, then dropped her like a hot casserole dish to the finish . . .