Since getting back from Oz, both S and I have both been laid low by a series of recurrent virus type ailments. The upshot of this is that we have done practically ZERO cycling this year. So, it was with some misgivings that we set off to Mallorca for some Easter ‘pre-season training’, in company with Greg and Lou, both of whom have already reached peak fitness after spending a fortnight cycling around the island of Cyprus.

Things got off to an inauspicious start when the pilot informed us, on landing at Palma airport, that we couldn’t use the rear exit because they were ‘fixing the engine’. Now, I don’t know about you, but fixing an aircraft jet engine seems to me to fall into an altogether more serious category of engine fixing than say, failing your MOT because the clutch has worn . . . In retrospect, it had occurred to me half way through the flight that he was gunning it in a bit low and steep from way out . . . Anyhow, we landed; on the runway, and via the wheels, and the right way up – can’t ask for more than that I suppose.

As if to compensate, the transfer coach was waiting to whisk us, away from the temptations of Magaluf to Can Picafort on the north east of the island, where we were booked in to the 1* Hotel Galaxia on an all inclusive deal organised through a dodgy internet ‘cheap package holiday’ outfit . . . what could possibly go wrong with that . . .

On arrrival I checked us all in and was handed two room keys and, in one of those moments when destiny decides the fates, I handed ‘402’ to Lou and kept ‘401’ for ourselves. I leave you, the reader, to decide by applying simple spatial logic, to divine the consequences of the proximity of our room door (brown left) to the elevator door (white right) . . . 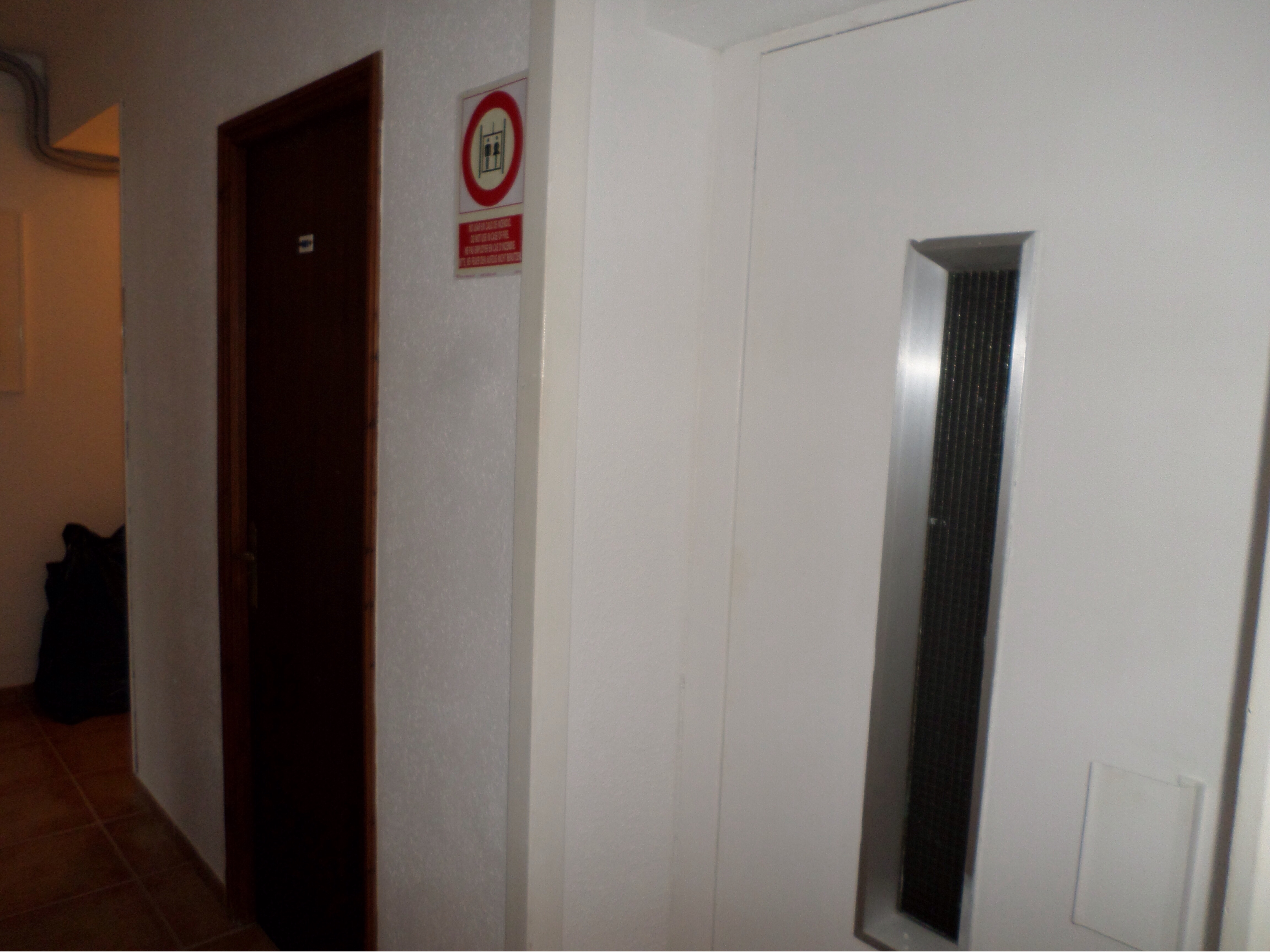 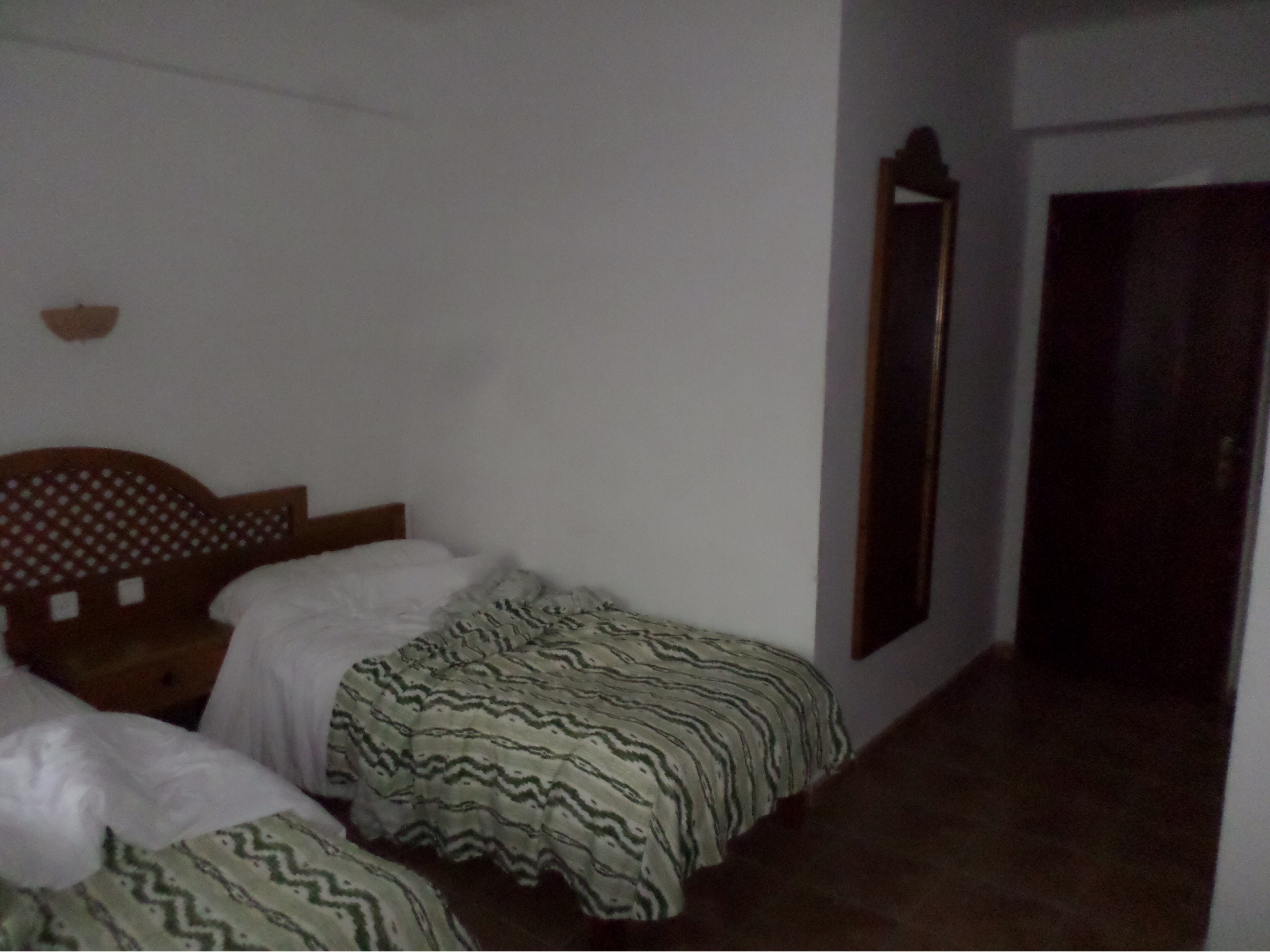 So, I was up twice in the night to demand a change of room and, when this was not forthcoming because it was outside the job description of the lad on the desk, waiting at reception in the morning for the manager to arrive. Needless to say, S is pleased with the new room . . . 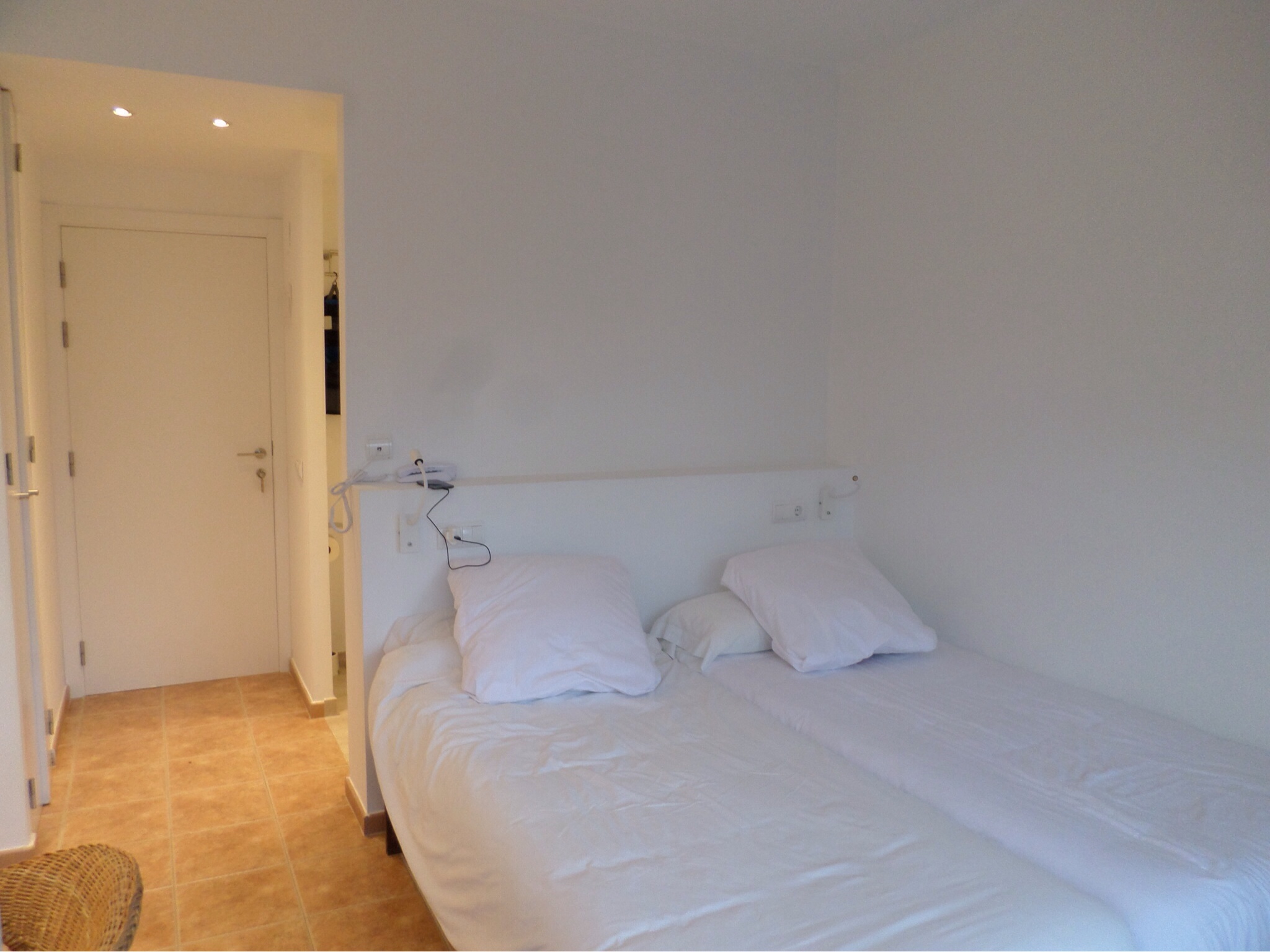 So, to the cycling.

Mallorca, it seems, has evloved into a microcosm of the EU (pre-Brexit I hasten too add) with the various resorts taking on the character of the predominant clientel. Clearly, Can Picafort in the spring is displaced Germany. Breakfast in the hotel is just like breakfast when ski-ing in the Tyrol (OK, I know its Austria but you get the idea), and the bike hire shop is German (or Austrian), I suspect originally hiring mountain bikes in Mayrhofen judging by the logo; and just like the super-efficient ski-hire places you get at that resort, except that they have a pneumatic inside-leg-measuring device for estimating frame size -maybe from Hamburg – which I will describe in a later post when the chidren are in bed.

Bikes hired, we set off on a Greg-led mystery tour. Now, it is a curious thing, but most of the time while cycling you constantly curse car drivers for being dangerous/too many/BW-owning, and so on. But here, there are so many cyclists on the road you end up cursing the bloody cyclists . . . Every 30 seconds a peleton of super-efficient, graphically attired, metronomes would swoosh past us (I am avoiding national sterotypes here you understand, on strict instructions fom S) and into the distance. At every junction there are clutches of lycra legends wating to cross; around every bend in the road there is the flash of bare behind from someopne pulling up their shorts after a visit to the bushes; and the inevitable gathering of concerned rapha be-clad Brits calling an ambulance for one of their pals who had overcooked the corner and met with the limestone wall. No matter, it didn’t talke S long to realise that you have to fight for your roadspace over here, so she has dusted off the old Karate skills and meted out summary punishment for anyone overtaking her. Don’t Mess with S . . . 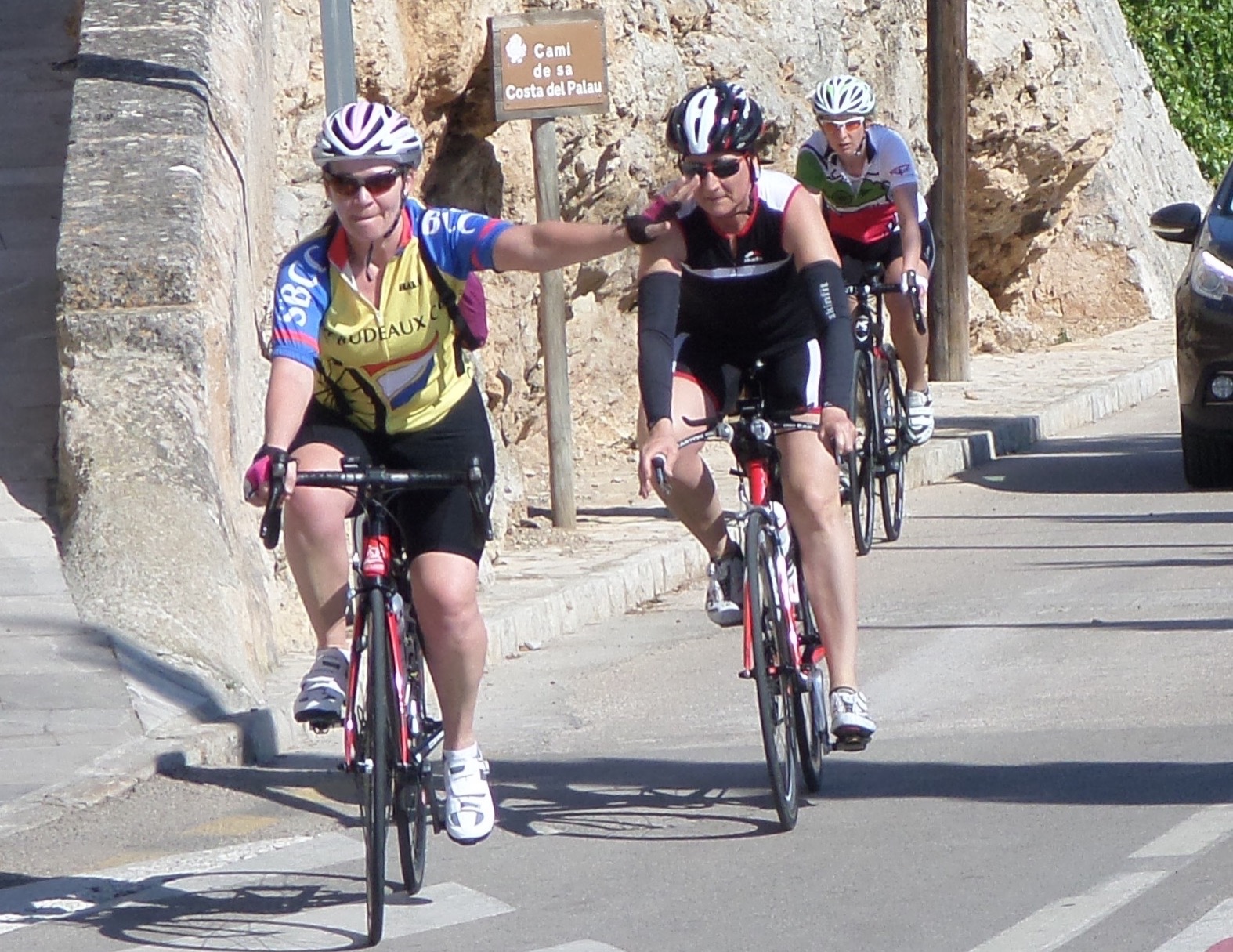 Day 1 has been a struggle. 40 miles on the flat has not quite done us in but there is nothing left in the tank. Just as well we were hanging off the back of Greg’s wheel for most of the ride – that is until he buggered off to follow one of the passing peletons of pedalling terminators . . . only to pip them at the ‘Can Picafort’ town sign. 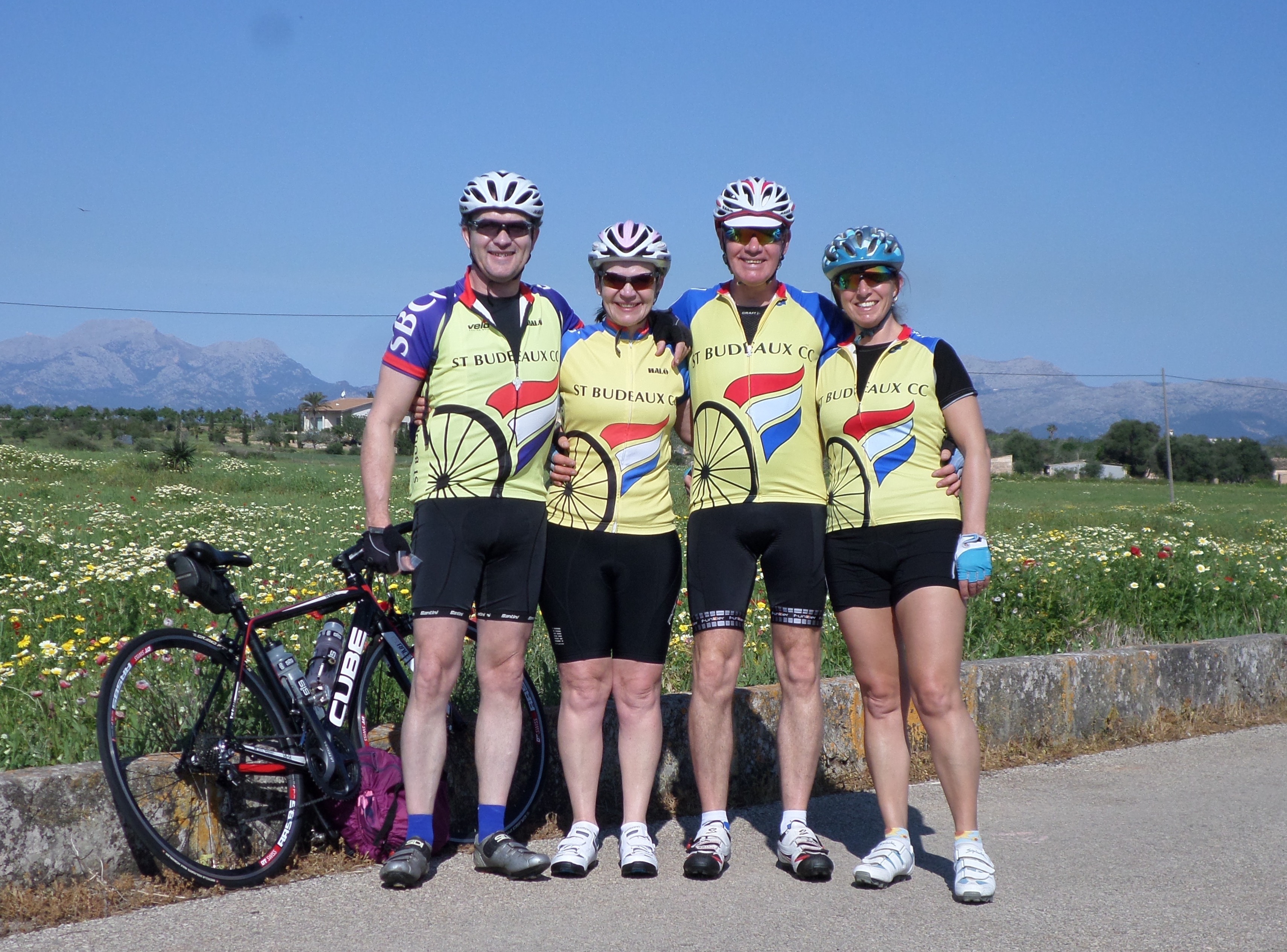 Tonight we will take advantage of the ‘all inclusive’ to replensish our energy . . . 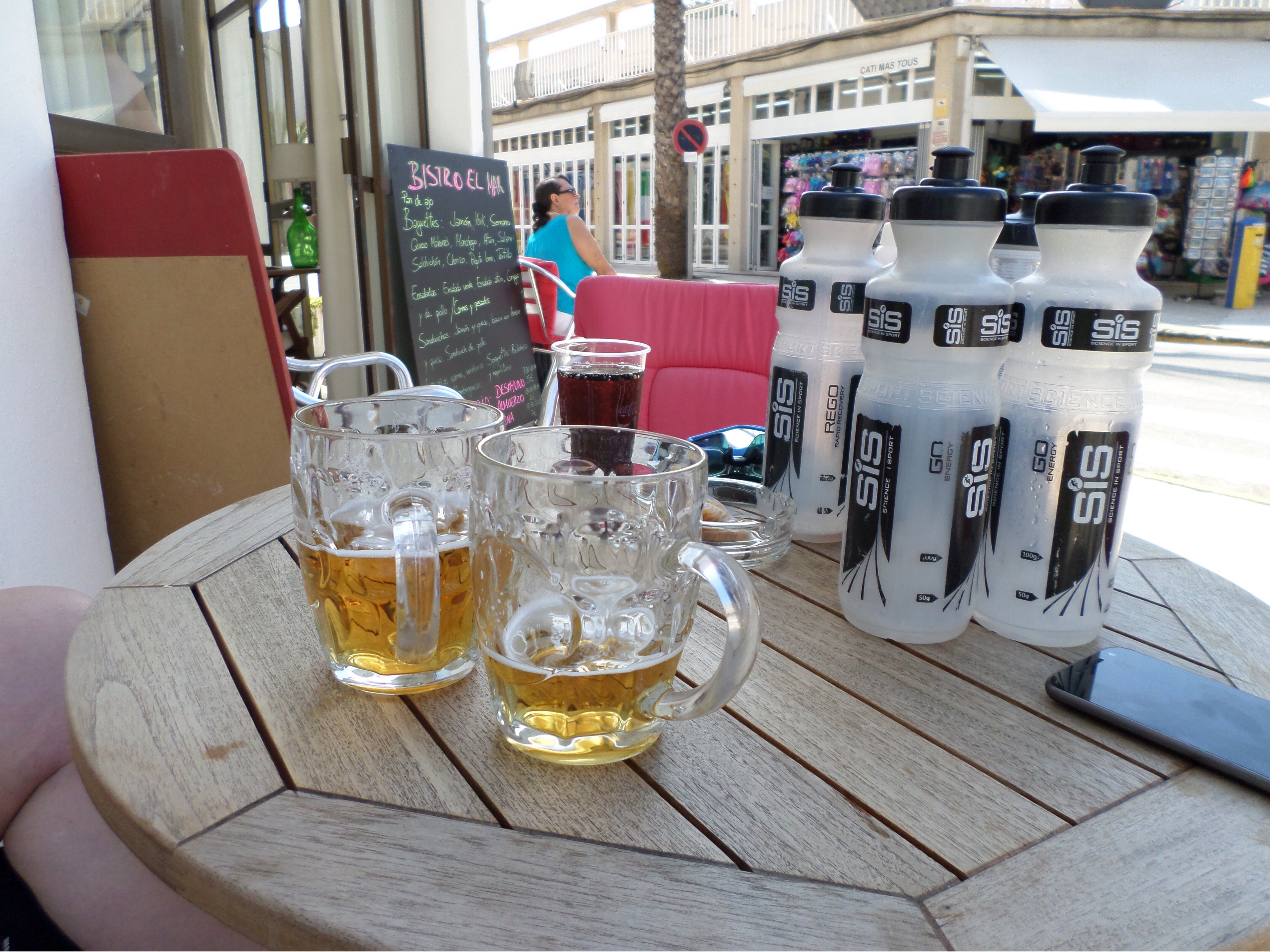 One thought on “Spring training”