One of the advantages of living in Plymouth is the ease of access to the ferry to France. At the merest whim, S and I can throw a few items of clothing into panniers, freewheel down to the ferry-port, buy a ticket and, 6 hours later, we will be munching on a plât de fruits de mer in Roscoff. The reality, of course, is quite different when full time employment gets in the way of such impromptu moments; so instead, there is usually a prequel of spreadsheet-led planning: pre booking of tickets and cabins, hotels and gîtes; fettling of touring bikes and replenishment of anti-histamines and Diacalm; not to mention the pre-holiday haircut. One day, freed from the shackles of work, I will fulfil the freewheeling ideal and keep a set of panniers fully loaded for immediate departure as soon as the sun shines – I might even go camping again if it shines enough, there has to be an upside to global warming.

So it was that this year we made the customary annual départ on the Brittany ferries service to Roscoff. Up at 5.30 am to get the 7.30 am ferry meant that the cabin I’d booked allowed us to catch up on missed sleep. Thereafter, followed the standard routine of cycling to Morlaix, where we stayed at our usual hotel and ate at our usual restaurant. We are now welcomed as repeat customers because, although infrequent, we always turn up at the same time every year wearing the same clothes and ordering much the same meals; as the years slip by we lose track of which was which and can only recall be referring back to this blog. 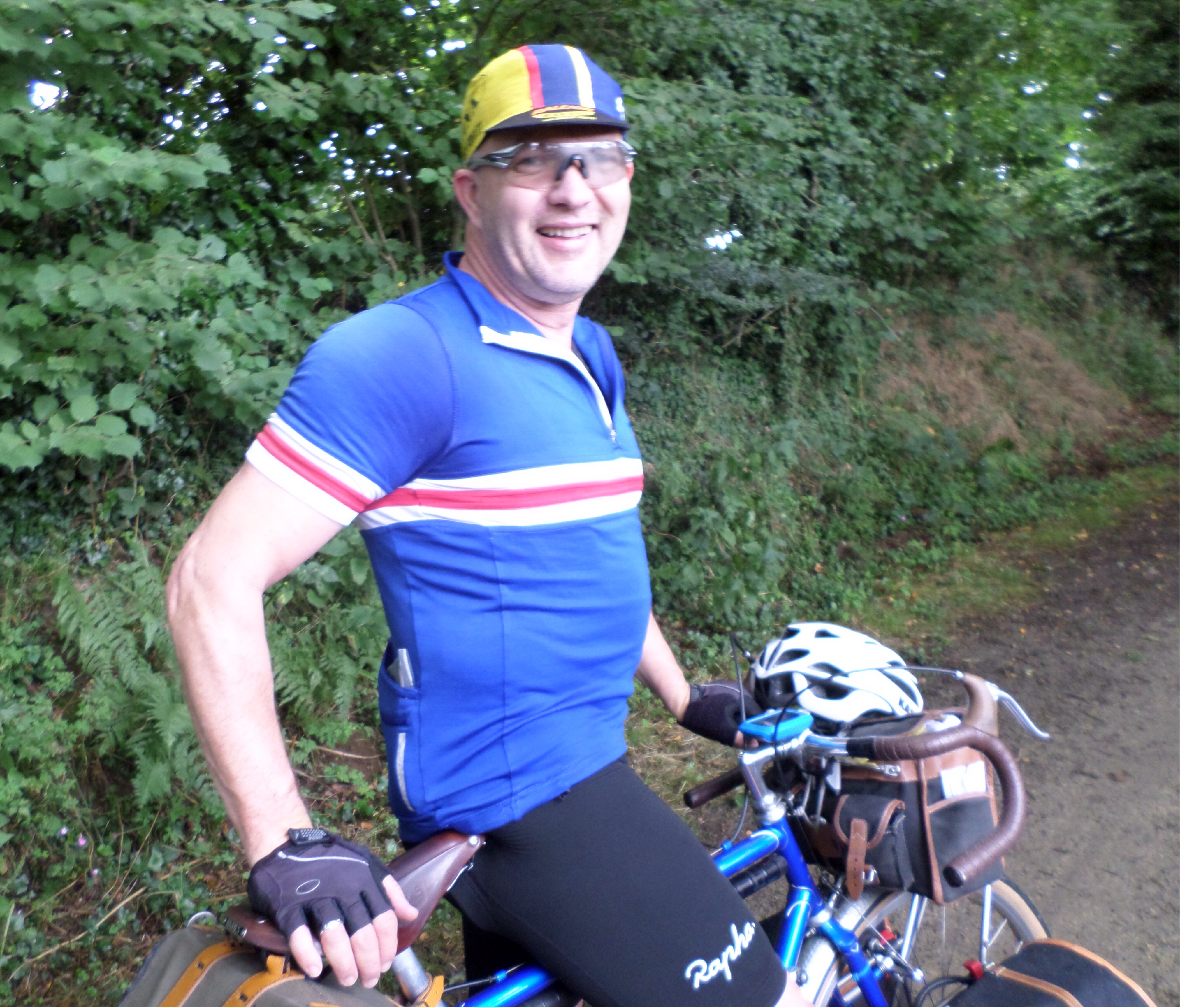 It is after this interlude that the real holiday begins . . . when we set off on the voie verte from Morlaix towards Rostrenen in central Brittany. The voies vertes are a great way to get into the heart of France. They are cycle tracks, often made on disused railway lines and canal towpaths, so are either flat or gently graded. This avoids all the hills, and the old railway lines are generally a direct route from A to B, so shorter. However, surfaces can be variable, so wide tyres and mudguards are essential for a smooth ride – this year, rain made the surface of compacted gravelly-sand quite mushy so, it was harder going than usual and S, accustomed to latching on to my wheel, got more than she bargained for. Maybe I will attach mud-flaps, or maybe not pour descourager les autres . . .

It is possible to cycle off road all the way from Morlaix almost until Nantes, first on the old rail route, and then along the Nantes-Brest canal. The canal is actually very sinuous because it is a series of interlinked canalised rivers rather than a completely man-made canal, so it is much less direct, mostly through heavily wooded valleys, very peaceful and teeming with wildlife. We would be cycling as far as Rostrenen on the canal, then going on-road to our destination of Lescouet-Gouarec, on a high ridge of land that forms and east-west spine along this part of Western Brittany. Our, gîte in this quiet village would serve as our base for daily rides out into the surrounding Breton countryside which conceals many unexpected treasures. Luckily, our hosts who own the gîte and live in the old vicarage,have accumulated a list of interesting destinations which we would otherwise have no idea about because they are not the standard tourist fare – but suit us vey well. On arrival, after stocking up on supplies, S and I attended a small arts and crafts fête in the village where we had almost been signed up for a 70 km rando event which was taking place the next day as part of a larger stage race (previously won by Warren Barguil, the Breton cyclist who won this years King of the Mountains in the Tour de France). Feeling a bit sceptical about this, though it was only 70 km, I did a bit of internet research and discovered it was ‘my chance to ride with previous Tour winners’ and join the race route for the last 45 kms to finish within a 3-hour cutoff, i.e. averaging 14.6 mph. Given our current state of fitness S and I decided to give it a miss this year, so we opted for a leisurely ride eastwards to Mûr de Bretagne. This is an oft used stage for the Tour, where the final hill or mûr (wall in French) provides a stiff uphill finish opposite the town, where the road is permanently painted with the names of local cycling heroes. This year, mindful of my previous cajolements to re-enact a final climb of Le Tour, S opted to bypass this signature ascent and opted instead for lunch.

So, with this in mind, we carried on to the Abbaye de Bon Repos, where the main race was scheduled to pass at about 14.25. The Abbaye was preparing for its annual son et lumière, which recounts Brittany’s history from Neolithic times to the Revolution. The show is complete with populated peasants’ village, mounted Knights and flaming torches; but that was for another time so, after an extended lunch of the usual baguette, fromage and a small glass of vin to ensure authenticity we awaited the arrival of the race. In France, even relatively small cycling events with pro and semi-pro teams have a rolling roll closure with police motorcycles and all the accoutrements of a full stage races, but in miniature. So first there was the local TV van getting ahead of the race to film the major climb, then the caravan of the sponsors (Le Télégramme, the local newspaper) handing out bags of tat, which S made a grab for in true Le Tour style. The gendarmerie on motorbikes to close he road were next, then the race itself and all the team cars following behind. As usual, the actual race itself occupied about 30 seconds of this 30 minute period.

One development which seems to be spreading is the 24/7 baguette vending machine. Regular readers will know that I first encountered one of these last year in Caurel – now one has appeared in Gouarec. Nevertheless, this was a welcome sight after the dissappontment of finding the boulangerie fermé after lunch on a Monday. This time S braved the mechanism and withdrew a fully formed pain rustique from within the whirring depths. 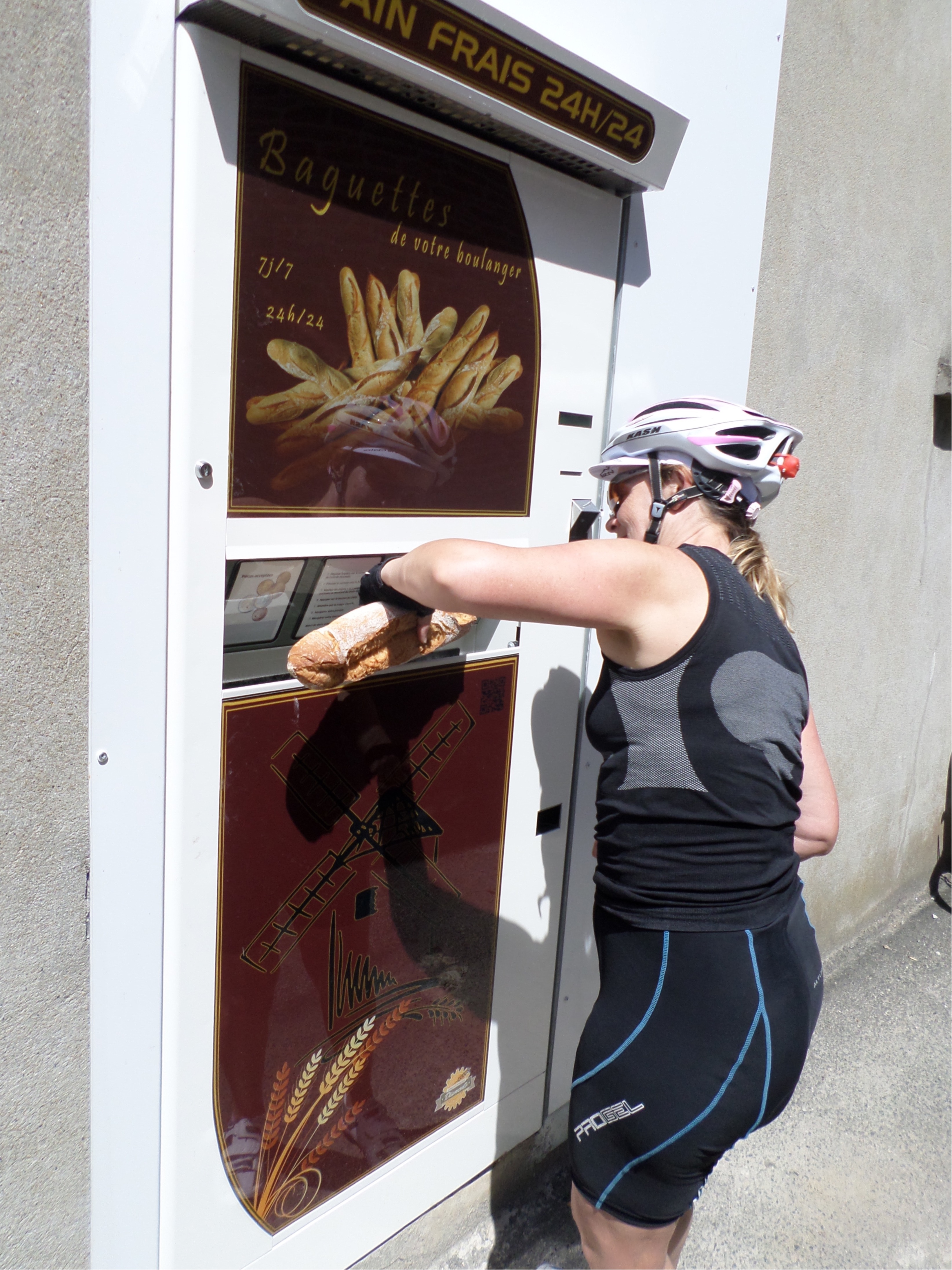 The next day we opted for a more leisurely cultivation of the mind. Central Brittany, probably because of its rural and unfashionable nature, is home to an eclectic bunch of arts & crafts types, including many British who have cashed in their overpriced, pebbledashed bungalows in the UK and decamped to a converted granite Barn for half the price. But there are other more exotic emigrés which you would never expect . . . so, it was that today we visited the Buddhist temple near Plouray. This is a branch of Buddhism called Drukpa, which was coincidentally celebrating its 1000 year anniversary this August, as evidenced by the marquees which had sprung up all around the grounds to cater for hordes of extra visitors. As usual, S and I cycled into the compound unobtrusively for a moment of quiet contemplation. Several monks wandered past as we inspected the temple; S took her shoes off and went inside to commune with the jos sticks while I inspected the newly scrubbed gold leaf on the exterior of the Stupa (temple) – a quite unexpected find in the midst of the Breton countryside which made the trip well worthwhile. 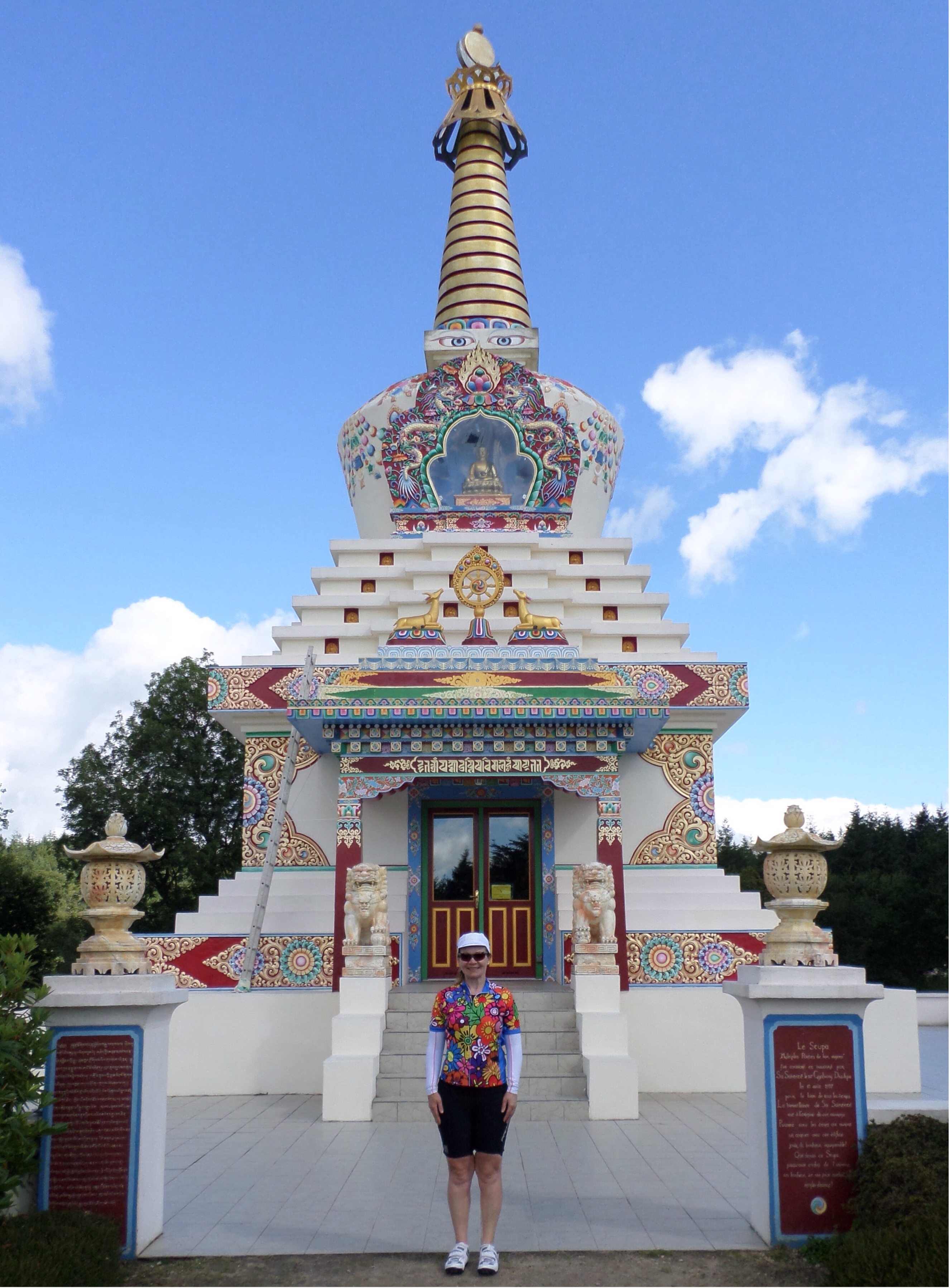 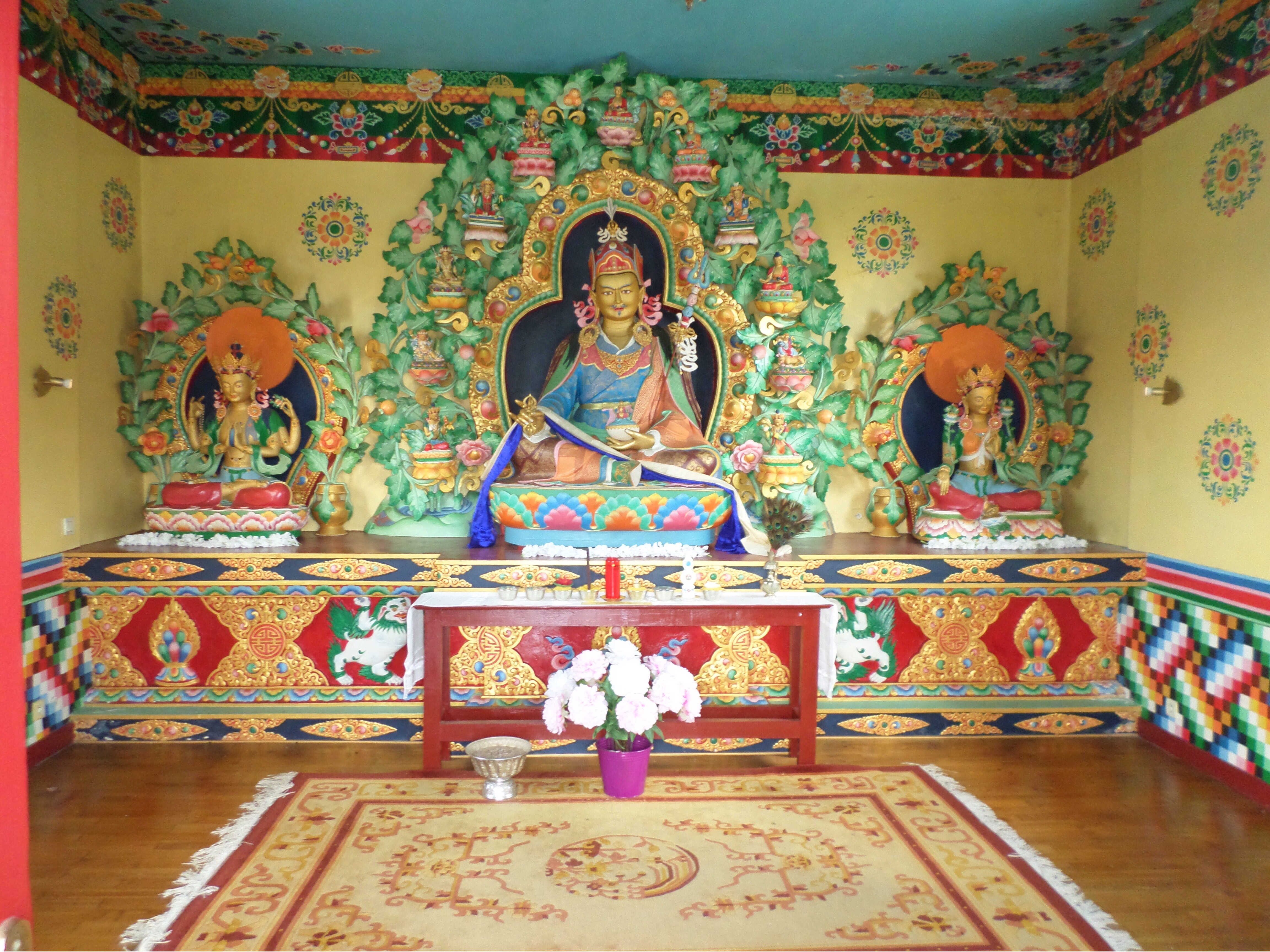 I left S to generate some watts at the prayer wheel . . .