If you’re into compact, granite churches then Brittany is the place . . . in a close tie with Cornwall. We have stumbled across numerous places of worship in our travels, but lacking any particular religious leanings, or enough architectural knowledge to make curiosity worthwhile, they can be a bit of a ‘ho hum . . . yet another damp and musty church’ experience. Nevertheless, for completeness, I feel it incumbent upon me to document our latest stumbling.

A favourite ride takes us from the gîte to the town of Cléguérec of the famed bicycle pyramid we encountered just after Le Tour had passed through, (see Blog post from years ago, I can’t be bothered to look up which one) and thence on to Pontivy and the Blavet cycle path. This follows the winding course of the river Blavet to St Nicolas des Eaux. This is a 1* site on the Michelin map, which means there is something worth seeing. Last year we didn’t find it but, in possession of new information provided by our hosts, we followed directions to St Gildas and found the little Chapel built into the side of the cliff alongside a hidden bend in the river. 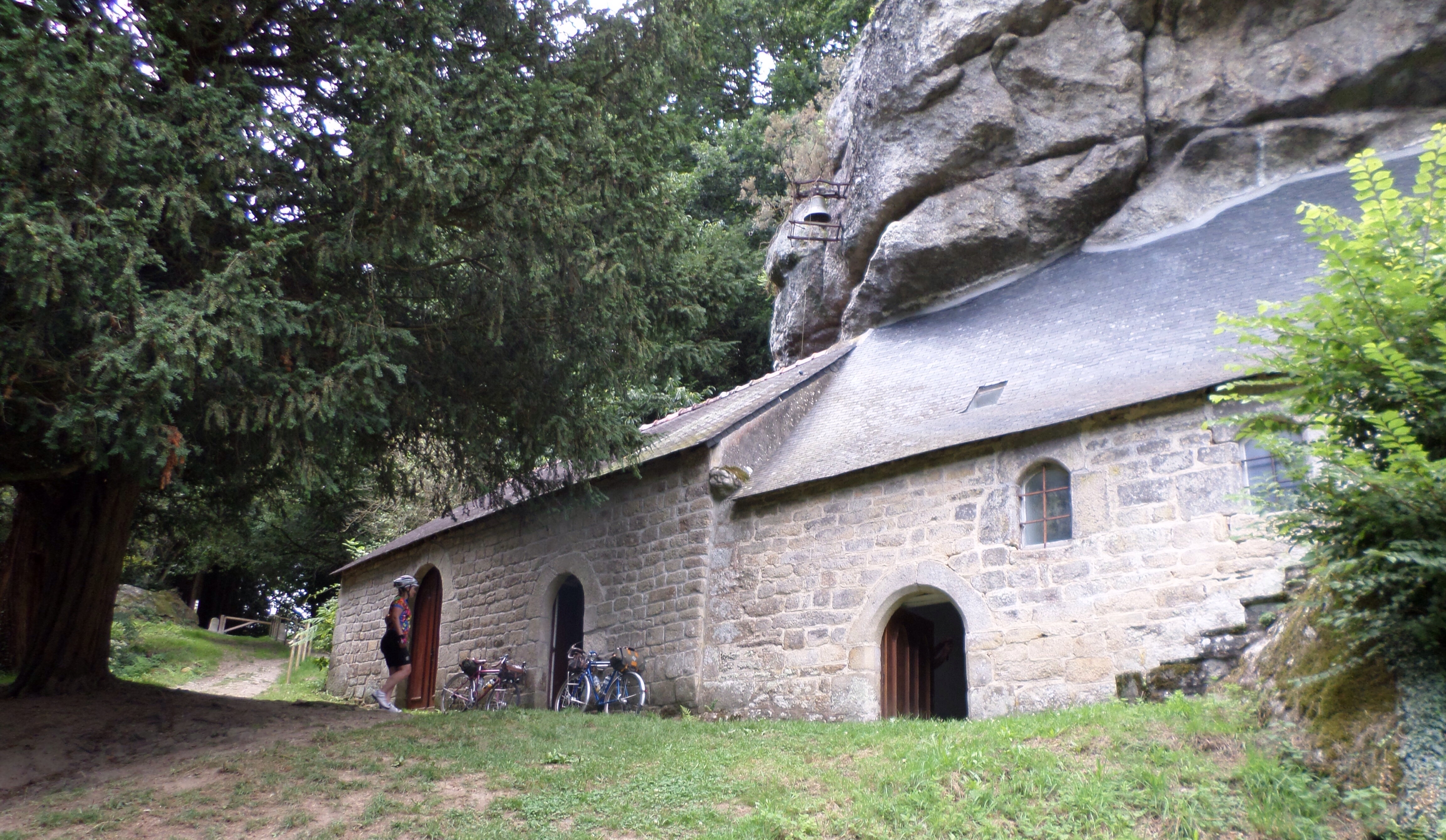 In contrast, the small village of Kernascleden boasts 2* on the Michelin map. On arrival we were faced with the dilemma of deciding which attraction merited this double accolade. Was it the Notre-Damne church of Kernascléden with its ‘finial-crowned pinnacles and the delicate tracery of its rose windows . . . twelve statues of the apostles in the portico . . . 15C frescoes’ and the ‘right transept dedicated to the representation of hell’ . . .? 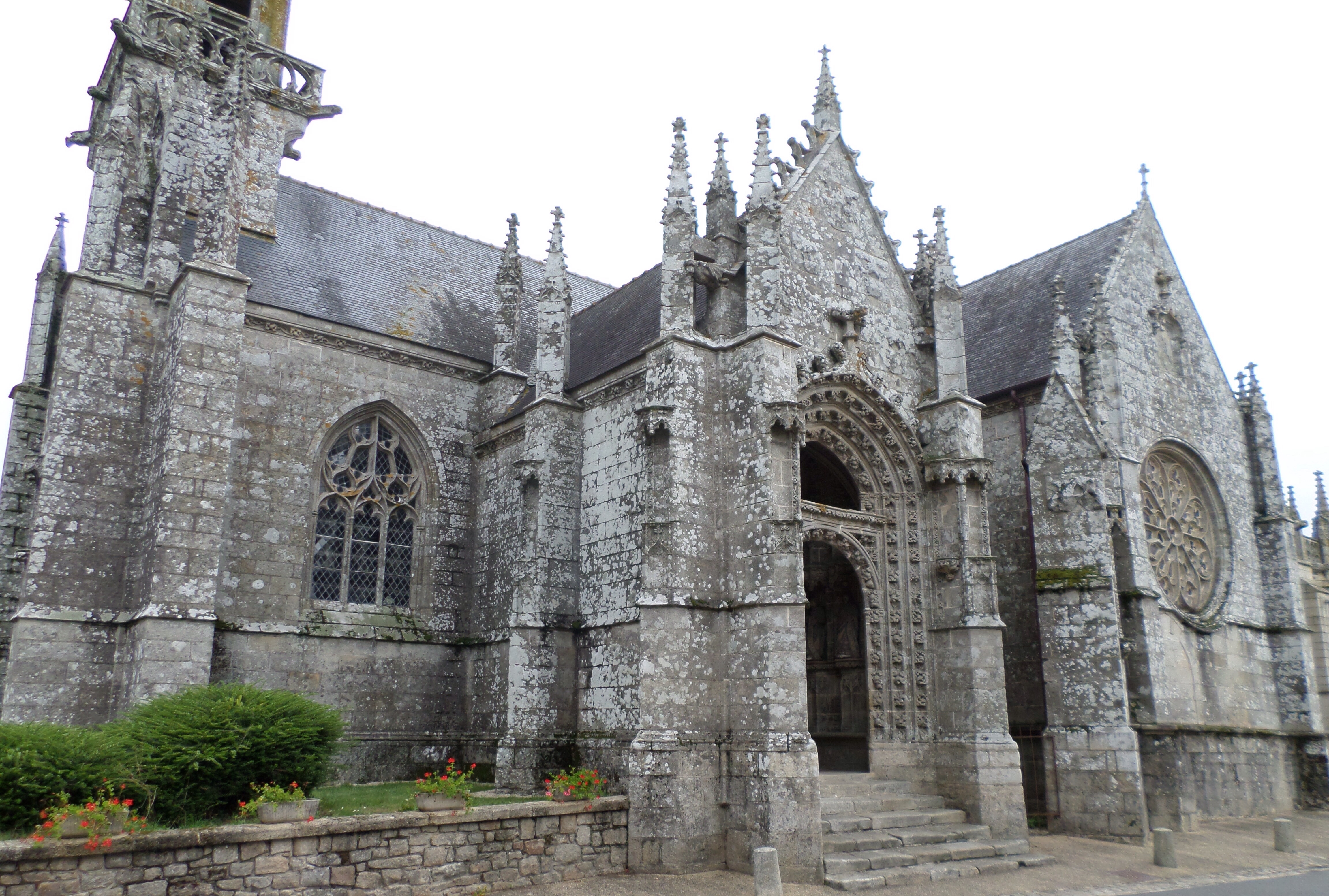 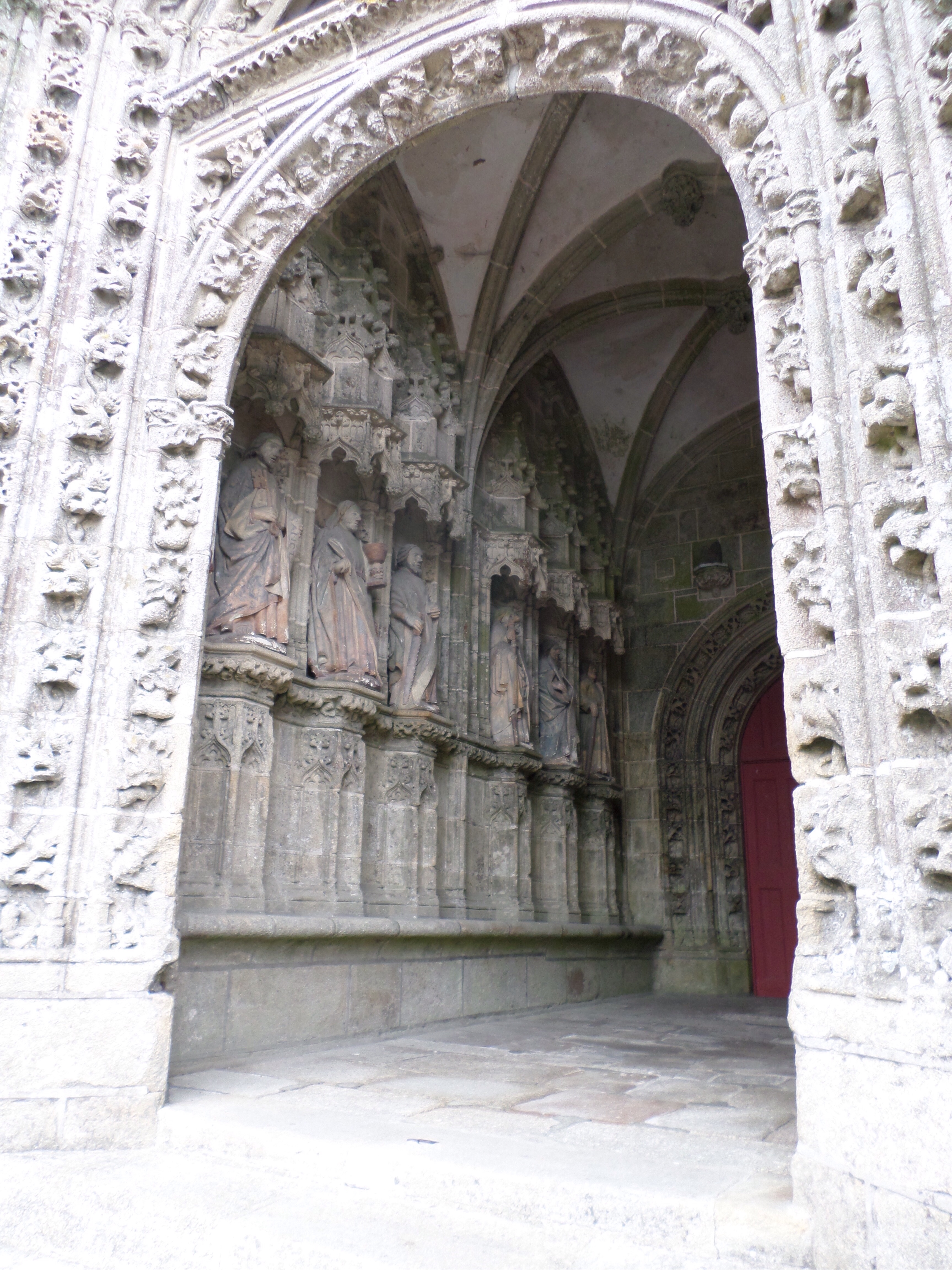 Or was it the magic bat ears in the bat discovery centre across the road?I leave it you, the reader, to decide which of these two competing draws came top of S’s tick list of must-see holiday attractions . . . 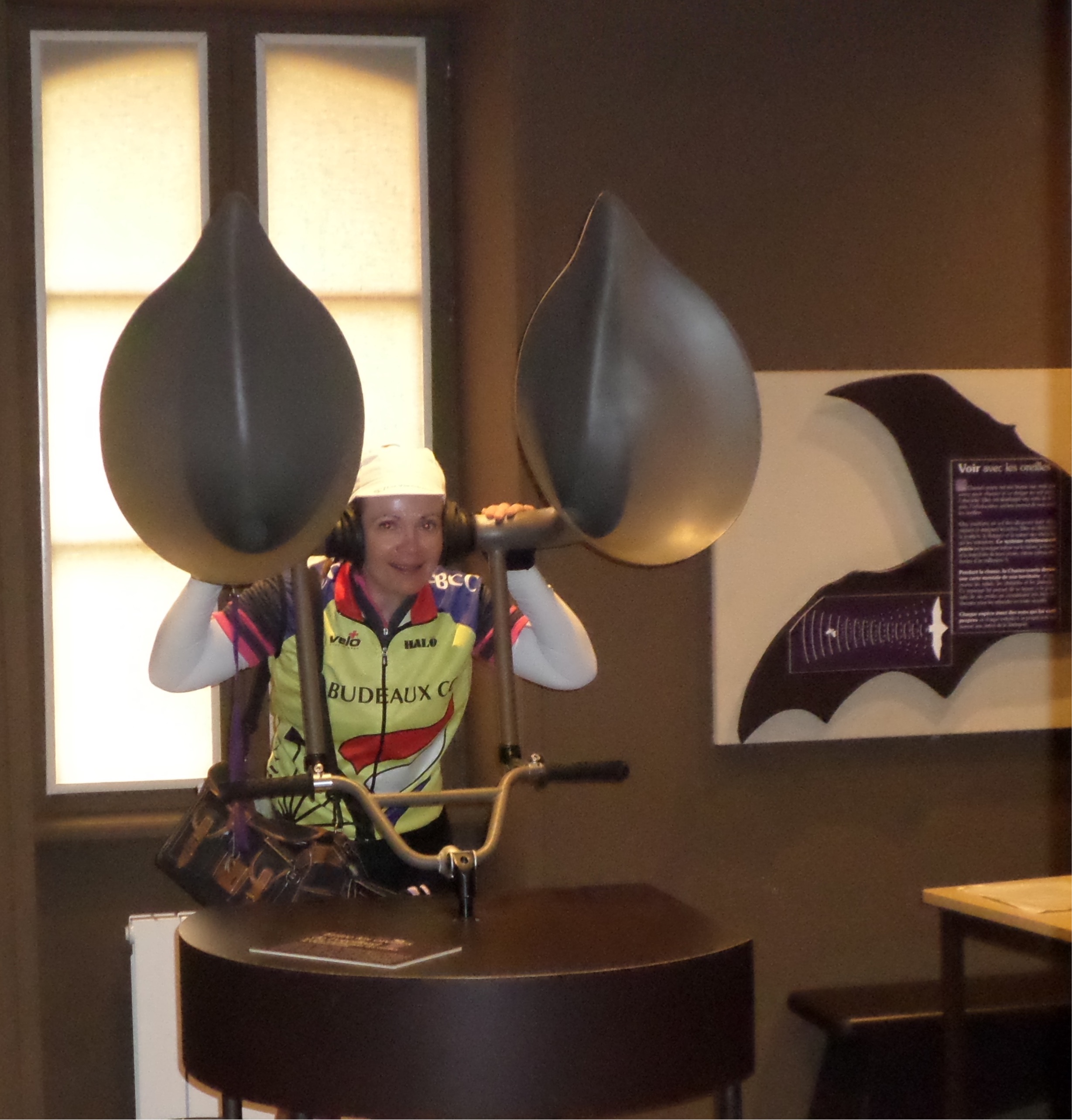 On our travels, due to the slow and measured progress that cycling affords, we frequently come across the sights and sounds of nature that would be missed when travelling by car or other forms of mechanised transport. The climatic conditions os this part of Brittany make it perfect mushroom territory, as evidenced by these beauties at the side of the road . . . 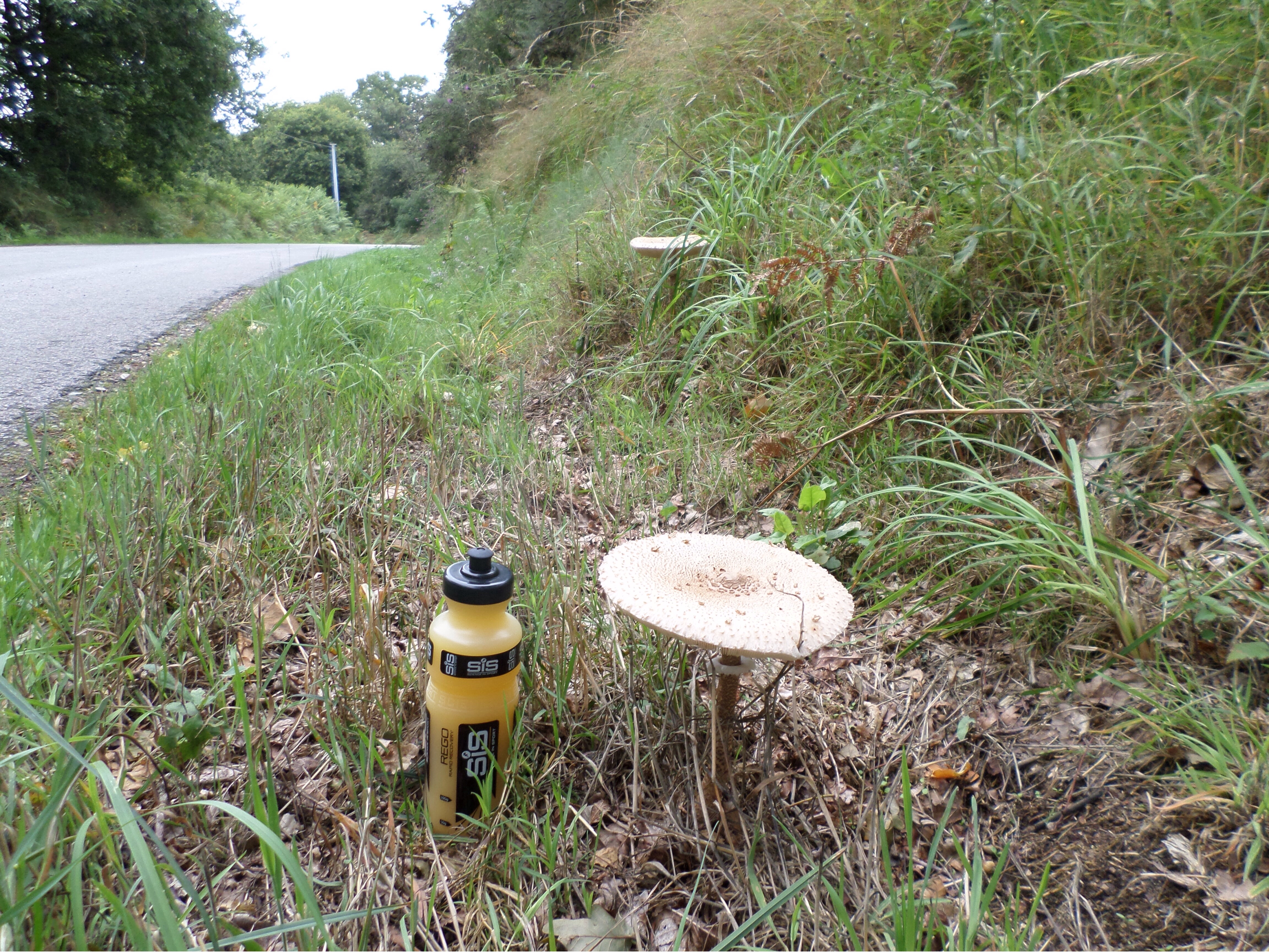 Now, regular readers will recall the last time we came across similar fungi (re. Blog post some years ago which I can’t be bothered to look up), and the subsequent realisation that they were home to anoccupant from the fairy kingdom who’s name shall not be mentioned when riding a bike. Being a scientist by training and, as I confidently informed S “lightening doesn’t strike twice in the same place”, we cycled on without leaving a token or offering prayers, or doing whatever is required in these circumstances. Suffice to say that, later that day as we cycled back along the Nantes-Brest canal, S reminded me that I had been correct in my prediction as I spent a happy hour with the tyre leavers and patches repairing not one but two simultaneous lightning strikes on both bikes . . . 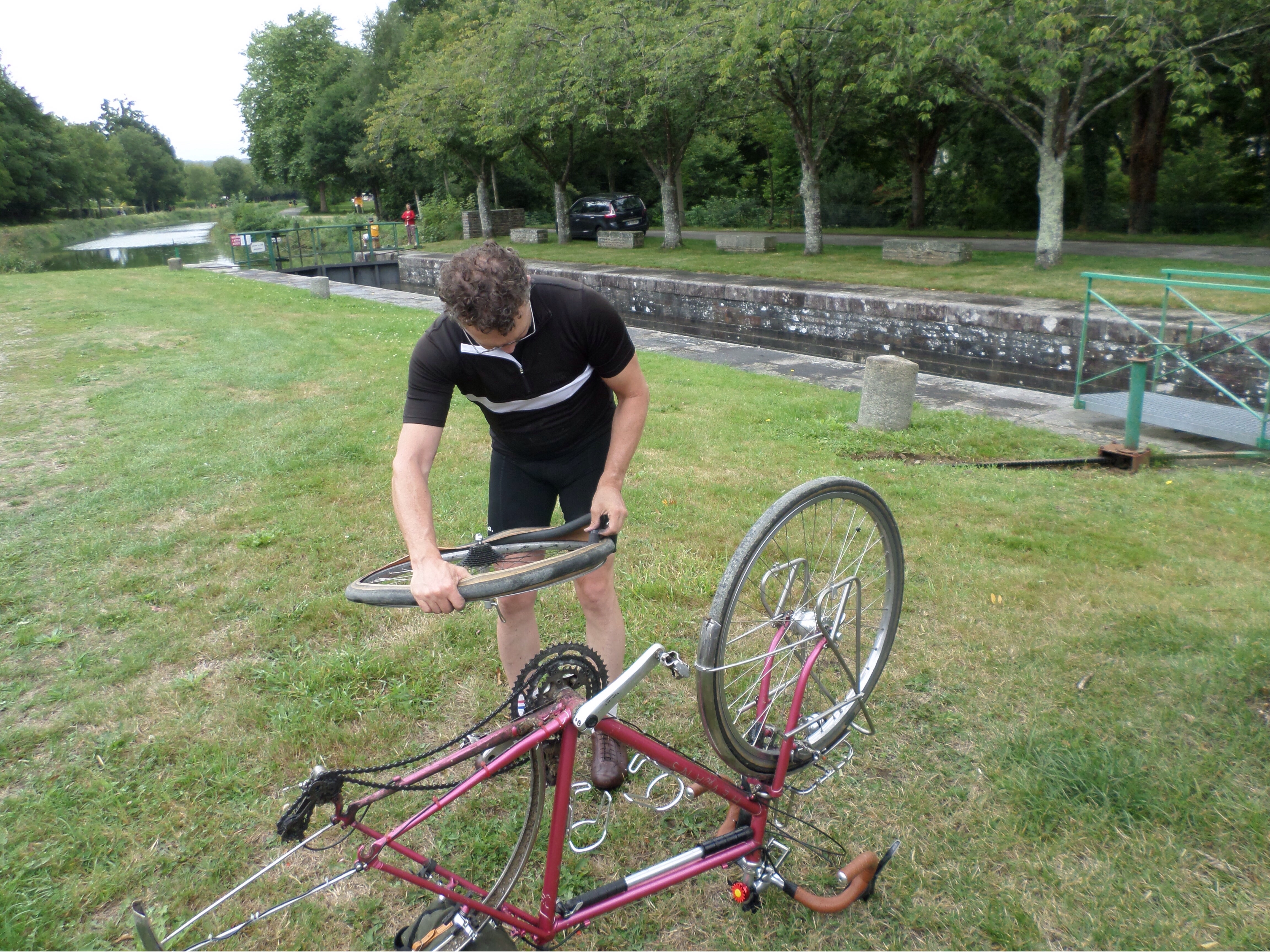 We all know the famous quote that ‘cyclists pedal on their stomachs’. In practice, one of two daily alternatives present themselves: the baguette, which can be hastily prepare and secreted away in the back pocket or bought en route from a boulangerie (preferred, particularly when supplemented by a custard slice or equivalent) or supermarché (DIY version of previous); or the menu de jour from any restaurant which falls within the cyclists price window (i.e. low and narrow). The latter of these two options invariably means the moules et frites, which we have enjoyed once so far on the trip. The former option is a picnic table located in some sunny spot. S has previously admonished me for including too much food related material in the blog, thereby giving the impression that we are at an extended lunch rather than actually doing any cycling – evidence for us gaining weight while ostensibly on an ‘activity holiday’. The explanation is simple, I keep reminding her, it is all muscle . . . 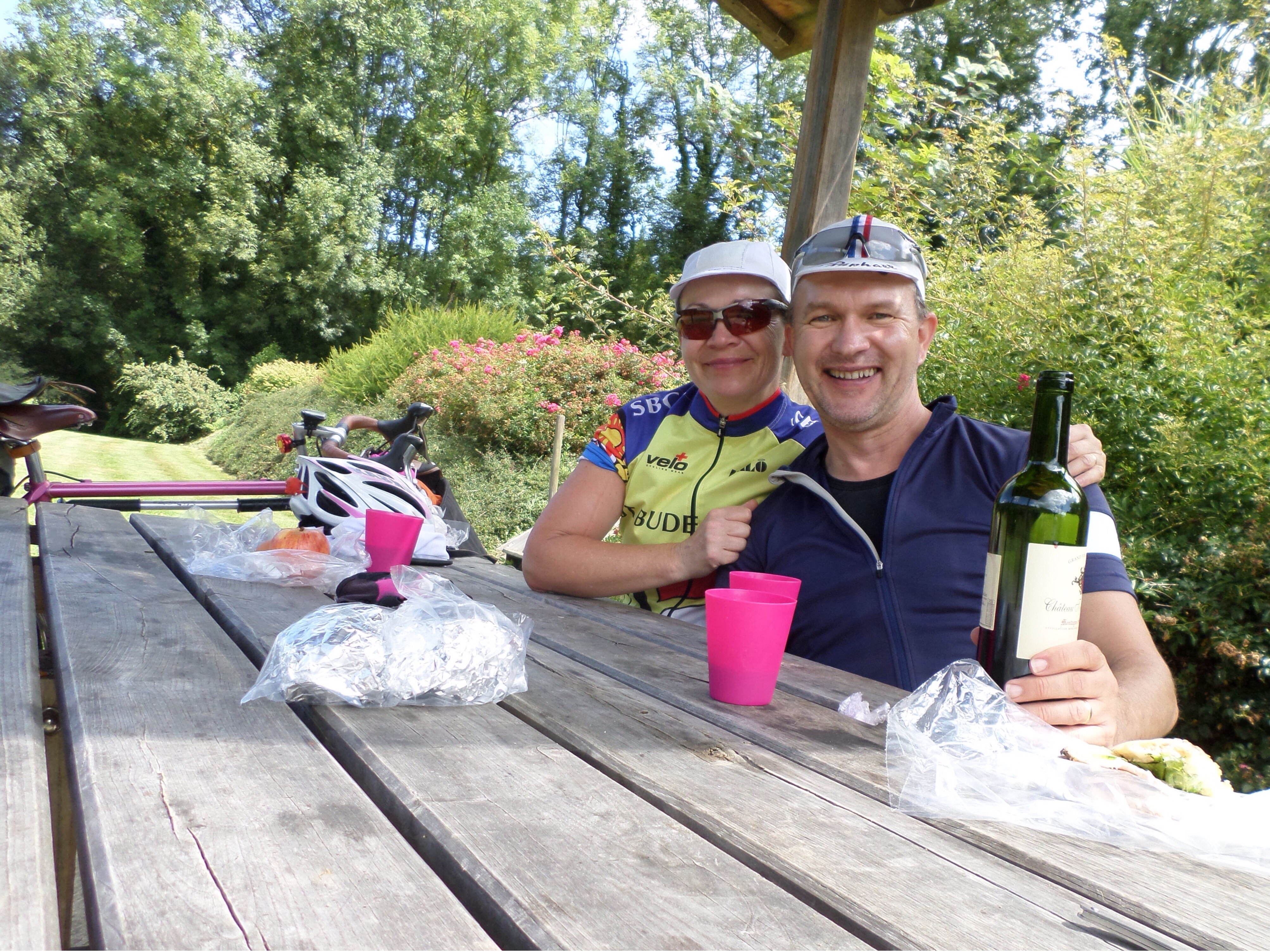