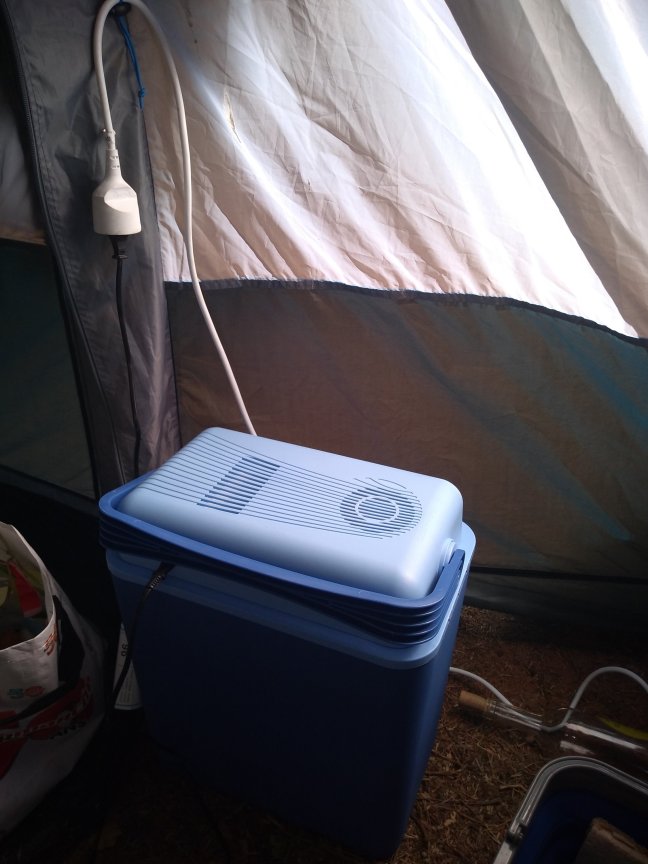 The mercury has remained high in this part of France, with temperatures in the mid-30s by the afternoon. The camper van fridge has been working overtime to keep all the beer and wine cold, with consequent unprecedented drain on the leisure battery. As an emergency measure I have had to significantly reduce the setting so that we now have to force down barely chilled beverages, and run the engine every day. Panicked by this state of affairs: “we must take drastic action” I say to S, “there is only one thing for it, we must purchase an emergency backup electric coolbox”.So off we go to the nearest large town, Millau, after carefully detaching the drive-away awning and marking out the wheel locations for when we return (that actually worked). First stop if Monsieur Bricolage (French B&Q), but they only have regular coolboxes of the unelectrified variety – not sufficient for our industrial booze-chilling purposes. After some inquiries in my best French I am directed to the nearest Casino-Geant who have the very thing for 25 Euro (bets on how long it will work) plus I also have to buy a French-GB plug adapter and extension lead so I can run it off our van mains supply . . .

With such an unlikely success in the bag we decide to make the most of the trip and take in two further sights nearby. The first is the Viaduc de Millau . . .

. . . and then on to the caves of Roquefort where they make the famous cheese. They certainly do have a lot of cheese and the tasting at the end confirmed that it is very good but, even now we can relax the blue-cheese-in-the-fridge ban (S was complaining about my trainers until I pointed out the real source of the odour), the minimum quantity was a quarter pain, which was pushing it a bit. So we elected to buy it from the supermarket like everyone else . . .

Apropos of the last blog post, so pleased was S with her paddling skills from the other day that she insisted on doing it all again, but this time on the more difficult categorie 3 part of the river, i.e. lots of rocks and rapids. Well, you remember that sign that warned of DEATH because of the Weir thatUNDER NO CIRCUMSTANCES SHOULD WE PASS; it so happened that the first part of the course, barely two paddles in, was over that very weir! Well, dear reader, the tale is long and laced with terror, but to cut it short: there followed a succession of near death experiences. At least that is how it seemed to me because S, at the front, spent the whole time holding her hands in the air saying “weeeee”, as if on a real-life version of the Disneyland log flume ride – unaware of my furious paddling behind as I tried to keep us on course, battling through the turbulent rapids, deftly plunging the blade into the water, first left then right, to avoid the rocks looming at us out of the boiling current as we hurtled along between the sheer canyon walls . . . 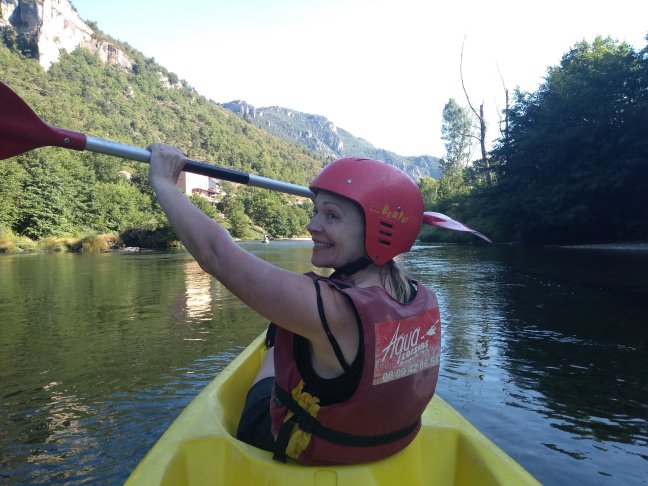 Needless to say we survived and spent the next day more sedately on a bicycle ride to Saint Enime, just to prove that we have actually done some cycling while nominally on a cycling holiday . . . except for one moment when I had to dissuade S from trying the zipwire across to the other side of the river . . .